A 4.45am alarm following the excesses of Christmas was the last thing I needed; fortunately dad had pulled the short straw and it was his turn to drive! 3.5 hours later we arrived to find a beautiful winters morning at Croft Circuit; pleased that we had made it an hour before the start as there was confusion surrounding signing on and the top quality entry had attracted big crowds.  Some spectators had to park on the road as the car park reached capacity fairly quickly!

Equipped with the obligatory day-glo yellow media band I headed to Tower bend for the first couple of stages. Procter (KP) announced his intentions from the start; being fully sideways from entry to exit in typical rally-cross style, even more impressive given the early morning damp conditions. He would take some beating on this day and inevitably jumped into a 7 second lead over the stunningly turned out 6R4 of Chris Wise.

With the level of KP’s commitment there was always a chance of mishap and an error on stage 2 saw the WRC Impreza drop back to second.  The Escorts of Croft regulars Paul Swift and Alex Lund were also highly entertaining through Tower, not passing up the opportunity to launch their Ford’s sideways through the open right hander.

Utilising the low sun I decided to head to the complex for the next couple of stages and by the end of stage 4 Peter Taylor was showing his hand, setting fastest time on the 4th run and moving ahead of wise into second overall.

Further back the Constantine brothers had built up a massive lead of almost three minutes to lead class 1 in 18th place.  Class 2 was headed by eventual winners Barry and Michael Lindsay in the 106, but lying second was the very rapid Ford Anglia of Leigh and Ross Mawson.  It was a real shame that they would later retire. Top spot in class 3 was being maintained by Martyn Tinker in the Lotus Exige while class 4 was proving much closer with only 15 seconds covering the podium positions.  Ian Woodhouse now held the lead from Alan Oldfield’s Darrian and early leader Paul Swift.

Delays earlier in the day meant a quick turnaround was in order leaving no time to look around service, and barely chance to catch up with dad.  More importantly though I did manage to grab a quick ‘cuppa’ courtesy of the genius that is the Jet Boil!

Following the short lunch break my location choice was again dictated by the low sun leaving Clervaux as my best option for stage 5.  Procter would lose time on this run reducing the lead gap to just 9 seconds.  Wise was now back in second following the demise of Taylor, with the Proton of Ben Mellors and Alex Lee in 3rd. Tony Bardy’s ex-works Sunny was lying 4th and Peter Stephenson rounded out the top 5. 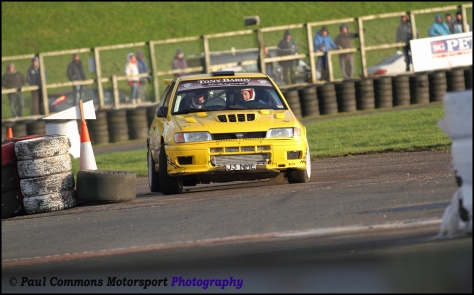 Panning was the only option for stage 6 with the light fading quickly, a technique which was getting tougher and tougher in the breezy cold winter air.  This shot of Peter Smith’s new toy was the best of the bunch.

Stage 7 was a photographers nightmare, being too dark to go without flash and not dark enough for the second curtain setting to have the desired effect. Fortunately stage 8 was run in complete darkness and so I headed for the hairpin to see what was on offer. 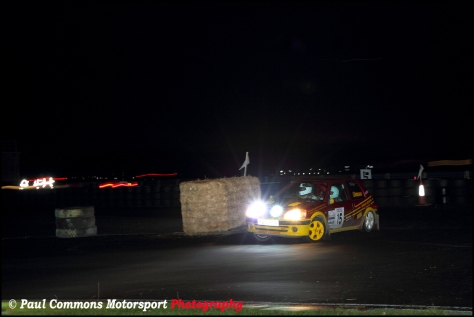 By 6 o’clock the event was finished.  Kevin Procter and Dave Bellerby had taken a well deserved win with a car that was not looking quite as smart as it did at the start of the day. The podium
was completed by the very consistent pairings of Chris Wise and Mick Johnson and Ben Mellors and Alex Lee.

Ian and Stephen Woodhouse had gradually upped their pace throughout the day to claim class 4 honours with 5th overall in their MK2.  Martyn Tinker and Jacqueline Jones took victory in class 3 by over 2 minutes with 7th overall whilst also claiming the award for top mixed crew.

The Lindsay’s won class 2 having lead from start to finish.  John Marshall and Chris Pattison in the Honda powered ZR pulled off fight-back of the day by taking 3rd in class.  They had dropped as low as eighth at one point after a couple of big offs (see the ZR-Tec Facebook group for the videos) but ended up just 9 seconds behind the MX5 of Paul Sheard and Anthony Nield.

With media band handed in and car packed it was time to hit the road; heading for Steak and Beer with time to reflect on a great days entertainment and 800 + photos to process….

For JPEGS, professional prints or any other enquiries please drop me an email – paul.commons@yahoo.co.uk

One thought on “Commons on Croft’s Christmas Stages”