Number 1 seeds, Nick Elliott and Dave Price, took their third RAC Rally Championship win of the year with victory on the Neath Valley Stages; in the process putting themselves back on top of the championship table with just one round remaining. 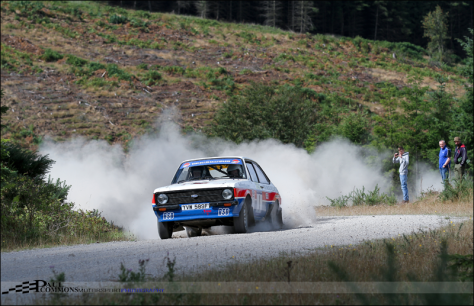 Round six of the RAC Rally Championship saw the crews head to South Wales for 6 stages on the super smooth Vale of Neath gravel which up until recently were annually graced each November by the likes of Jari-Matti Latvala and co at WRC level; the use of Bryn also allowing us to tick another stage off the ‘to do’ list!

The opening section of stage 2 was our first point of call but before the crews reached us they were faced with 9 challenging miles through infamous Rheola.  Unfortunately, for everyone involved in the event, the Zutec sponsored Sunbeam of Owen Murphy and James O’Brien retired less than 1km into the first stage with electrical problems; a huge disappointment as they were in with a genuine chance of competing with the top Ford runners.

Elliott meanwhile had shot out the starting blocks, taking six seconds out of closest rivals Jason Pritchard and Phil Clarke in Rheola with pre-event championship leaders Richard Hill and Steffan Evans a further 5 seconds back.  It was obvious that Elliott’s rivals were going to have to take a few risks to keep up with his flying Ford.

And by the end of stage 3 the pace had taken it’s toll on a number of the top runners with Terry Brown and Tomos Whittle falling foul of Bryn, Matthew Robinson and Sam Collis retiring after stage 3 with overheating problems and, most spectacularly of all, Jason Pricthard and Phil Clarke having a massive off at Junction 5 of Margam.  Thankfully both crew members were ok, but unfortunately the same could not be said about the car!

Although losing further time in stage 2, both Hill and the fellow ford crew of Meirion Evans and Iwan Jones managed to claw back a few seconds in Margam leaving Elliott’s lunch time lead at just over 10 seconds.  Roger Chilman and Bryan Thomas were going well in fourth with top K2 class runners, Tomas and Eurig Davies, rounding out the top five.

Rain threatened the afternoon stages, and whilst their was only a short burst where we were in Bryn, it did come down quite heavily during the second running of Rheola.  Not that it had much of an impact on the event as Elliott and Price were able to extend their lead in stage 4 and confirm the inevitable on the second running of Bryn; taking a comfortable 20 second lead into the Margam finale.

And so it was Nick Elliott and Dave Price who emerged from Margam as victors; taking their third win of the year and returning to the top of the championship points table.  Taking dropped scores into account they have effectively wrapped up the title with just the Trackrod Historic Cup remaining in late September.

A season of consistency continued for Richard Hill and Steffan Evans as they secured second place in their D5 Escort.  While the flamboyant Meirion Evans and Iwan Jones capped off a well deserved third with a stage win on Margam 2.  Roger Chilman and Tomas Davies would hold station in 4th and 5th allowing Tomas and co-driver Eurig to claim the K2 victory.

David Stokes and Guy Weaver yet again took category 2 honours in their MK1 Escort with 7th overall.  Chris Browne and Ali Cornwell-Browne were runners up in class C5, almost a minute in arrears but just one place further back overall.  While victory in the all MK2 affair that is class D3 went the way of Ben Friend and Sean Kennedy with 11th overall. 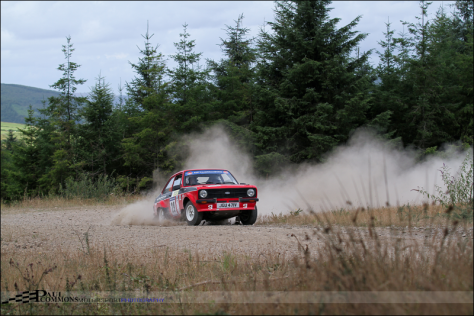 It is always nice to see something slightly different on the stages and therefore great to see Peter Smith and Patrick Walsh take class C3 with 12th overall in their Opel Ascona; in the process claiming the honour of first ‘non Ford’ crew home. 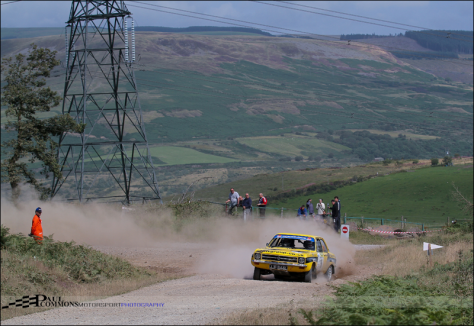 Ray Cunnigham and Arron Forde in their Mini had been putting in another giant killing category 1 performance over the morning stages; holding a 50 second lead at the lunch time service halt.  Gearbox issues however put pay to any chance of victory leaving the big Volvos of Graham Waite and Ian Beveridge to battle it out with the Ford Cortinas of Paul Mankin and Gwilym Roberts.

Roberts and co-driver Don James were lying second after the first loop of stages but a strong run from Waite, with Gill Cotton on the notes, through Rheola 2 saw the huge Amazon leap into the class lead.  Although quicker through the final 2 stages, a 30 second time penalty would ultimately cause Roberts and James to drop off the podium with Ian Beveridge and Paul Price, in their PV544 version of the Swedish marque, taking second, just 16.6 seconds away from the category victors; the Cortina of Paul Mankin and Desmond Bell claiming third, 6.4 seconds further back.

In the modern event, Welsh Championship rivals Luke Francis and Alex Allingham would again lock horns in their quest for top spot on this very fast event.  Allingham, with Chris Williams alongside, would take an early lead in their Group N Impreza but were unable to keep the B13 specification Evo 9 of Luke Francis and John H Roberts at bay over the remaining five tests. Karl and Guy Simmons, in their S11 WRC Impreza, would come home third some 45 seconds behind the winners.

Meanwhile, in the RAC Open category, Simon and Alister Crook would take top spot in their Opel Manta, finishing a very credible 9th overall; an equivalent time in the Historic event would have landed them eighth position.

Overall It had been another great day following the RAC championship and nice to be back in the South Wales forests for the first time in nearly two years.   The last time I attended the Neath Valley Stages it was a compact event within the confines of the Rheola / Walters Arena complex and whilst it has always been a top event it is great to see it mature into a proper multi venue stage rally.

We now have a three week break before hitting the Shropshire forests for the next round of the BTRDA Championship; the Woodpecker Stages on August 30th.

For digital images, professional prints or any other requirements please email me at paul.commons@yahoo.co.uk.