David Weston and Kirsty Riddick put in a stellar performance to claim victory on the Llandudno based Cambrian rally.  Second place was also enough for Steve Perez to land the BTRDA Gold Star championship crown.

Wet and slippery conditions faced the crews as they headed for the forests surrounding Betws-y-Coed for 8 stages which would ultimately decide which of the 2 championship contending Focus WRC pilots would walk away with the 2014 BTRDA Gold star championship title.

Paul Bird and Aled Davies got off to the worst possible start, losing 58 seconds to their rivals following an off in the tricky opening Crafnant stage.  This was a monumental blow for the Superbike team owner as the time deficit would be almost impossible to claw back without issues for the other drivers.  Steve Perez, co driven by Paul Spooner, meanwhile could breathe a little easier, knowing that as long as he beat Bird the title would almost certainly be his.

It was however David Weston and Kirsty Riddick who managed to pull away from the pack in stage 2, their first run through Llyn Elsi being 5 seconds quicker than anyone else.  And by half way it looked like the Scottish crew were on their way to a first BTRDA win of the season as they held an 11 second lead over Perez.  In fact only Bird seemed able to go quicker than the Subaru pairing; the Ford driver winning every remaining stage bar the second running of Llyn Elsi.   The Llyn Elsi stage most definitely belonging to Weston as the S12 Impreza was yet again quickest through this test.

By the finish Bird and Davies had managed to get within 32 seconds of Weston and just 12 seconds shy of rivals Perez and Spooner. While second and third for the Focus crews left them completely tied on points, it would be the Chesterfield man who took the crown based on his 22 point haul from the Plains Rally in May.  I doubt anyone imagined the title would be decided on 7th best scores when the championship kicked off last February!

After struggling to get to grips with the S12 Impreza on the Woodpecker and then finding his feet on the second half of the Trackrod it was pleasing to see Weston on the pace from the start of the Cambrian.  He was visibly quicker than anyone else in Crafnant 2 and a deserving victory was also rewarded with 3rd place in the BTRDA Gold Star points table.

Behind the front three, Matt Edwards, with Will Rogers on the notes, showed his class by taking 4th overall in his B13 specification Evo 9.  The local man improved his pace thoughout the day, but saved the best till last; just one second slower than Bird in Penmachno North and then matching the much quicker machine on the final Penmachno South test.  Suffice to say the North Wales man took B13 victory but it would be interesting to see what he could achieve behind the wheel of a WRC machine.

Like Bird, Welsh Championship contenders, Alex Allingham and Chris Williams endured a terrible start to the event in their Group N Subaru, losing three minutes in Crafnant following a roll which left them in 123rd position!  An excellent drive through the field however saw them climb to 13th overall, claiming the Welsh Championship in the process as main rival Luke Francis hit problems.

In fact Luke Francis’ retirement, caused by a holed fuel tank in Penmachno South, turned out to be very costly indeed as their fourth DNF of the year meant they would also miss out on the BTRDA B13 championship honours.  A title which instead went to the Evo 6 crew of Simon Rogers and Andrew Sankey.

Cambrian Group N victory went the way of Thomas Naughton and Andi Mort in their Evo 9.  The Mitsubishi crew were regularly fastest in class and were rewarded with a fine 6th place; over a minute clear of nearest rivals Pat Naylor and Ian Lawrence.  The 20 points gained from taking class victory was also enough to leapfrog Russ Thompson and Andy Murphy to take the 2014 BTRDA Production Cup title. 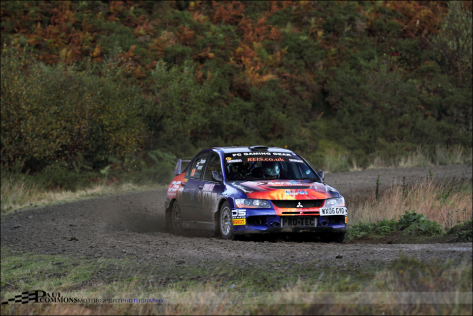 Matthew Robinson and Sam Collis rounded off their year in style by taking 7th overall in the H3 spec Ford Escort.  Even more impressive when you consider that Welsh legend Gwyndaf Evans was second in class, some 42 seconds in arrears.  It has been a phenomenal year for the Escort crew, adding BTRDA H3 and overall Historic honours to the Silver Star crown which was theirs by July.  Incredibly they also finished 6th overall in the final Gold star standings; a fantastic performance given some of the machinery they were up against.

The other big championship battle heading into the final round was the 4 way tussle for the 1400 crown.  With just 2 short stages remaining, title favourites Mat Smith and Giles Dykes held a near 2 minute lead over the rest of field.  However the little Ka had suffered radiator damage on the second running of Llyn Elis as well as beginnings of a clutch problem.  Remarkably they somehow made it through to the end, finishing fourth in class.  And a further 2 minute time penalty was not enough to stop them taking a well deserved 1400 title.  This had been an up and down rally to end an up and down season for the Yorkshire based crew.

Instead rally honours went the way of fellow championship challengers Marcel Freling and Karen Robinson in their MG with a commendable 17th overall.  By the halfway point they found themselves behind the Peugeot 106 of Dan Gray and Matt Rogers but were able to improve their pace over the afternoon loop of stages to take victory by 26 seconds.

The wet and slippery conditions had taken their toll on the silver star field with 5 of the top ten seeded cars, and 11 in total, finding themselves on the retirements list by end of the second stage!  There were however some stand-out performances behind the already mentioned Robinson and Evans.  Indeed third 2 wheel drive crew home were Rex Ireland and Adrian Scadding with 15th overall in their H2 Ford Escort who were clearly enjoying themselves in the process …

While the Fiesta R200 of Kit and Tim Leigh was the second front wheel drive car home in 19th overall.  This also represented top spot in class B10, beating Gary Pearson and Dave Robson’s Peugeot 208 by just 5 seconds. 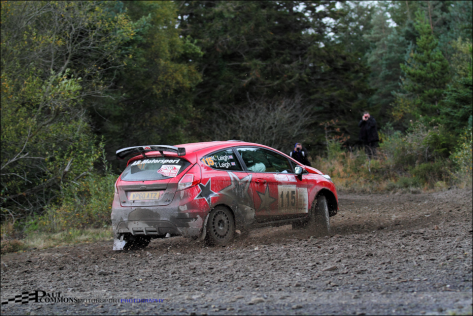 B11 class honours went the way of Simon Tuckman and Shaun Hughes in yet another Ford Escort.  26th overall was enough to claim the class victory by 40 seconds from the similar machine of Jeff Wincott and Kevin Booth. 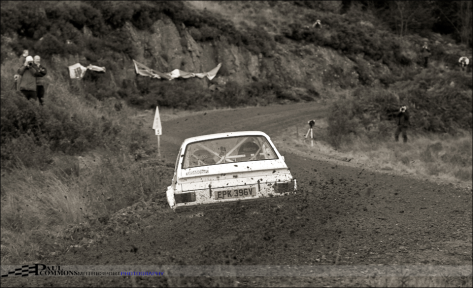 Meanwhile Steve Ellis and Steve Mcphee’s BMW 325i ended the day in 29th place and top of class B12 while Saleh Hijazi and Tom Bishop were class N3 victors in 75th position. 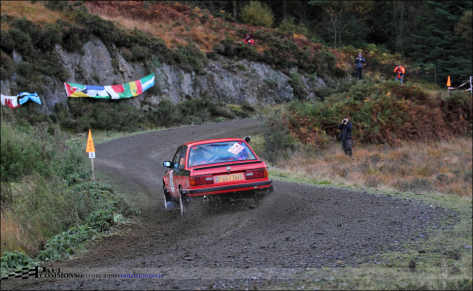 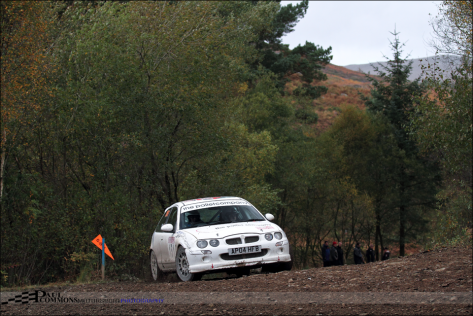 Overall I thoroughly enjoyed my first visit to the Crafnant stage and the tricky conditions were a suitable platform to end what has been a fantastic series.  After starting the season in the Stratos, the BTRDA title must have been completely unexpected for Steve Perez.  However the Chesterfield man has been on top form throughout the year, and although he may not always have been the fastest, he did take three outright wins and was able to keep the car on the road when it mattered most.

And that is it for my 2014 national rallying year.  I expect to see many of the crews competing on Rally GB next month and maybe a few on the RAC as well.  With Perez likely to be back in the historic class in 2015, it will be interesting to see who will be in the fight to take his title.  Roll on the Wyedean in February ….

For digital images, professional prints or any other requirements please email me at paul.commons@yahoo.co.uk.