Euan Thorburn and Richard Cooke put in a sensational afternoon drive on the Lake District based Malcolm Wilson Rally to convert a 15 second deficit into a 46 second winning margin. 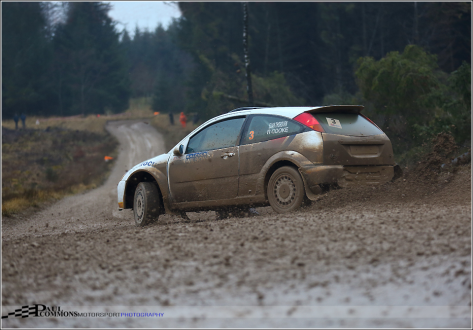 A 2.30am alarm was required for the long journey up to the Cumbria for round 2 of the BTRDA rally series.  The 40th anniversary running of the Malcolm Wilson Rally would see 118 cars leave the M-Sport based start to attempt 8 stages, covering 44 competitive miles, within the Whinlatter, Grizedale and Greystoke forests.

High winds and occasional showers greeted our mammoth climb to junction 7 of Comb for stage 2 and it was Paul Bird and Aled Davies who made the most of the tricky morning conditions; opening up a 5 second lead over Thorburn and Cooke on completion of the undulating Whinlatter forest tests.

Bird then continued his excellent start to the event, making full use of his local knowledge to register fastest time in both Thornsgill and Greystoke to complete a clean sweep of morning stage victories.  Thorburn was however able to keep the Cumbrian man in sight, and by the time the cars reached the first Penrith service halt the reigning Scottish champion was just 15 seconds adrift with more than half of the rally remaining.

Thorburn was using Paul Benn’s 02 Focus WRC for this event and maybe the Scotsman just needed the morning to re-acclimatise with this particular car, having used a similar model to claim the 2013 BTRDA and 2014 Scottish titles.  This seemed to be the case as an excellent drive through Grizedale North saw him take stage victory by 15 seconds before going better still in Grizedale South and registering a time that was a whopping 29 seconds quicker than anyone else to now lead the event by the same margin from Bird and Davies.

Stephen Petch and Ian Windress meanwhile had found a good rhythm in their Fiesta R5+ and joint second fastest time in stage 6 promoted them 3 places up the overall standings to 4th overall; now just 11 seconds behind the very rapid B13 Subaru of Jim McNeil and Tony Bassett.  Conversely, David Weston’s strong morning display, which had seen the WRC Subaru lying in third place overall, unravelled with a puncture in stage 5.  He and Kirsty Riddick however remained just 12 seconds behind the final step of the podium in fifth following the completion of the Grizedale loop of stages

While Bird’s victory hopes had faded, second appeared to be safe having secured a mammoth 1 minute and 17 seconds gap to third with just 8.5 miles left to run.   The fight for the final step of the podium however was most definitely on; now between Petch and Weston following the unfortunate retirement of Jim McNeil’s Subaru with an electrical gremlin.

Heading into the wet final stage, the WD40 backed Ford held a slender 2 second lead.  But try as they might, Petch and Windress could not quite match the 7 minute 30 second marker laid down by the Subaru of Weston and Riddick; eventually missing out on third place by a mere 4 seconds.  Weston on the other hand will have been pleased with third as even without the puncture, the top two would have been difficult to catch.

Upfront, Thorburn continued his total afternoon domination by claiming another impressive stage victory with a time that was 17 seconds faster than Bird to end the rally with a winning margin of 46 seconds.   His time in the wet afternoon running of Greystoke was a whole 21 seconds quicker than the morning test!  This had been some drive by the Berwickshire man.

There was little that Bird could do to defend his lead with Thorburn in this sort of form and so his search for a fifth Malcolm Wilson Rally victory will have to wait another year.  However the Cumbrian will be consoled by the fact that he has a healthy BTRDA championship lead after adding 28 points to the 30 earned from his Wyedean Rally victory.

Luke Francis and Jim McNeil locked horns early on in the battle for B13 honours; Francis setting third quickest time overall in Revellin Moss, only for McNeil to go quicker in Comb and then Greystoke to take an 8 second class lead into the first Penrith service, with the Mitsubishi of Wayne Sisson and Fiesta of Andrew Gallagher lying 12 and 16 seconds further back respectively in 3rd and 4th position in class.

McNeil then dominated the two Grizedale stages setting 3rd and 5th fastest times overall to take a commanding 42 class lead into the final 2 stages.  Meanwhile, Andrew Gallagher, with Jane Nicol on the notes, had managed to haul in Francis and was now six seconds in front of the Welshman; a battle that would prove key given the demise of McNeil before the start of stage 7.

Indeed, Francis may have been able to cut the gap to just 2 seconds heading into the Greystoke finale, but 5th fastest time overall for Gallagher would ensure that he and Nicol would head back North of the border with class victory and a fine 5th place overall. 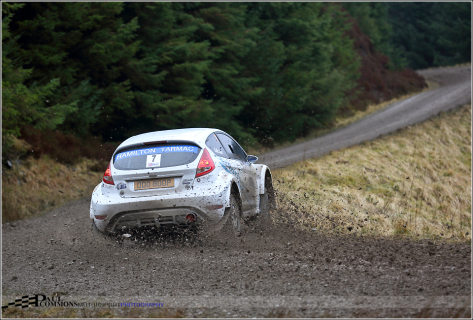 In fact a slow time for Francis on the final test cost him second in class too; Wayne Sisson and Neil Shanks putting in a strong final stage performance to take the runner up spot in B13 with 6th place overall.

Russ Thompson and Thomas Naughton were again the front runners in the top production class; the pair each taking 2 class stage wins on the morning stages, but with Naughton and Andi Mort holding a 9 second margin over Thompson and Andy Murphy at the first Penrith service.

As in other classes though it was the Grizedale tests that proved decisive; Thompson coming out on top and taking a 17 second lead into the final 2 stages.  While Naughton was quicker in both, the gap was just too big to close, leaving the Clitheroe man to wrap up his second BTRDA class win of the season with 7th position overall. 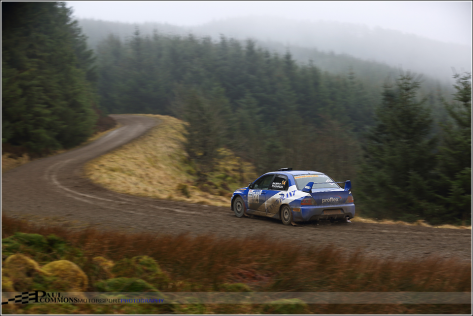 Matthew Robinson, with Kim Baker on the notes this time, put in yet another stellar performance to claim both the Historic and Silver Star honours on the Cumbrian event.  The Escort crew were kept on their toes early on by the evergreen Steve Bannister.  The infamous red striped MK2 however suffered from a puncture in Grizedale North, causing them to take a stage maximum as a result and ending any hopes of class victory.  That aside the Ripon man would have taken some beating; finishing the day in 10th position overall to take Silver Star honours by 1 minute 28 seconds and H3 by a massive 2 minutes 55! 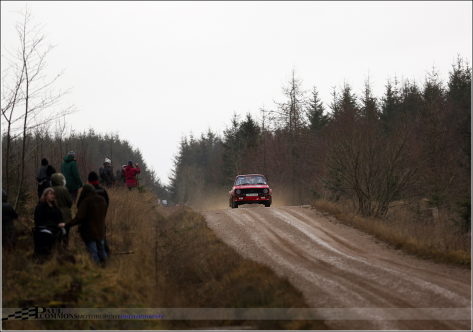 You would not have believed Boyd Kershaw had been away from the sport for 2 years after he and co-driver Mark Fisher opened up a 29 second class lead after the first four stages.  In fact the Escort crew went on to set fastest time in class on all eight stages to take a comfortable 1 minute and 14 second victory over the front wheel drive Astra of Stuart Egglestone and Brian Hodgson; ending the day as second 2 wheel drive crew home in 14th position overall. 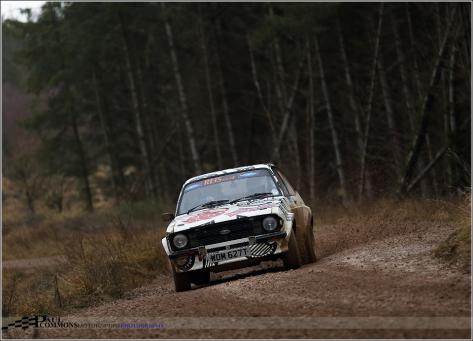 The much anticipated pre-event duel between Yorkshire rivals Mat Smith and David Bennett unfortunately ended on the morning loop of stages.  Bennett, with Alistair McNeil alongside, had been lying 16th overall with a 10 second class lead before incurring event ending damage in the short Thornsgill stage.  This left Smith and Giles Dykes to take a comfortable 1 minute and 15 second class victory in their newly liveried Proton; but more impressively ending the day as third 2 wheel drive crew home, claiming 15th position overall in the process. 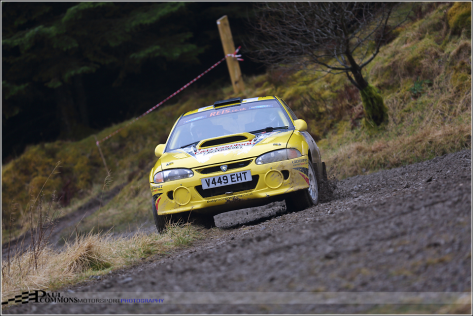 Meanwhile victory in the 1400C class was again claimed by Keith and Mairi Riddick in their MG ZR, giving them a large championship class lead at this early stage of the season.

Class B10 was settled sensationally on a tie break after both Greg McKnight and Barry Lindsay registered the same overall time after 44 competitive stage miles.  In a fantastic battle that saw the class lead change 4 times throughout the day, Greg and Chris McKnight finally ended the day as class winners courtesy of their quicker stage 1 time. 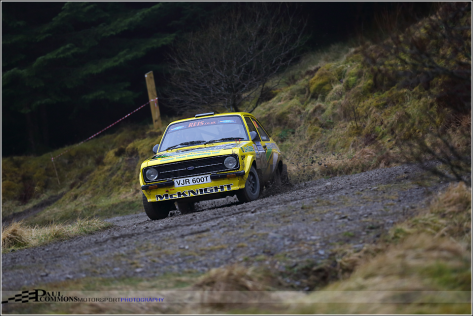 Andy Kelly and Roger Herron came out on top of the all Escort affair that was class H2.  David Dobson had however been leading the class in his MK2 before an off in Grizedale South ended his hopes of victory.  Instead Andy Kelly picked up his pace as the day went on to take class honours by 47 seconds with 36th position overall. 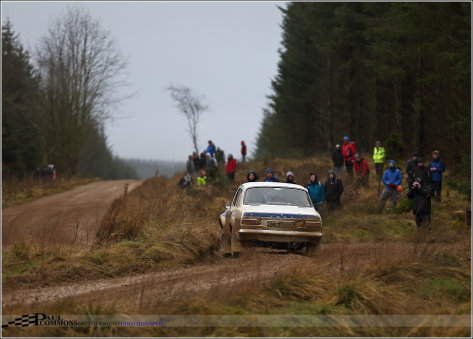 Tony Simpson and Ian Bevan were guaranteed class victory with an event finish by virtue of being the only car entered in N3.  However a solid performance by the Fiesta crew was rewarded with 43rd overall. 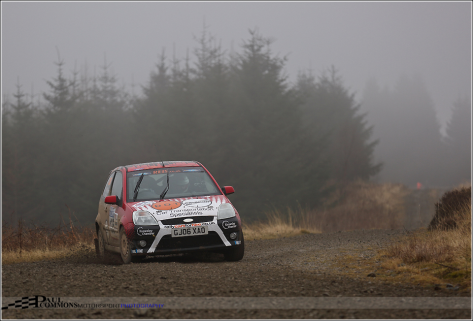 Barry Jordan and James Gratton-Smith were holding a near 4 minute class lead when the only other H1 crew in the event, the Escort of David Thirlwell and Graham Reader, retired in Grizedale South.  Jordan and Gratton-Smith however beat several more powerful cars on their way to an excellent 44th overall. 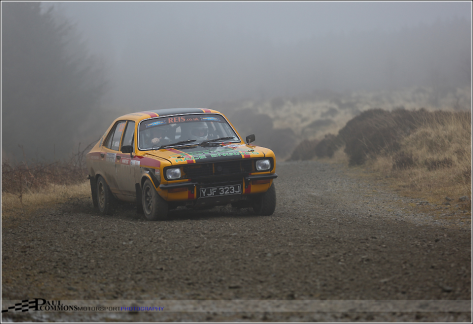 Mick Quinn and Neill Cameron in their Nissan Micra got the better of Phil and Chris Spilsted’s similar machine to take RF1.0 class victory with 80th overall. 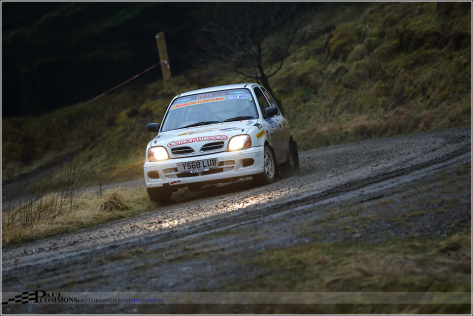 Nick Carr and Joe Sturdy claimed RF1.4 victory with a winning margin of 2 minutes and 33 seconds to finish the day in a very respectable 55th position overall. 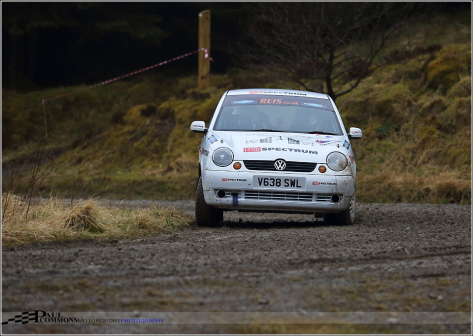 While James West and Steve Eggington put in a strong performance to claim RF1.6 honours by over 3 minutes with 49th position overall in their VW Polo. 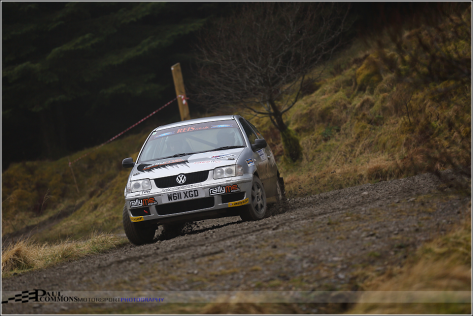 To be honest I didn’t think anyone would have the beating of Paul Bird in his own back yard but Thorburn’s afternoon charge was simply breathtaking and hopefully he will be making a few more appearances south of the border in 2015;  a major highlight from a great day following yet another well run BTRDA event.

We just about made it to three stages, having almost been turned away from Greystoke due to the car parks being jam packed.  I am not sure I have ever seen so many people in there and for the first time ever I actually enjoyed the stage.  A significant amount of tree felling and surface changes since our last visit has completely transformed the viewing.  Clearly charging a mere £5 for parking works and is most definitely the right way to get spectators to park where you want them to.

After a full days action it was gone Midnight before I arrived back in Birmingham; the 21.5 hour day probably the longest period of time I have gone without sleep since last years Le Mans.  Was it worth it?  Absolutely!

For standard prints at very reasonable prices please follow the link to my Photobox page: PRINTS