With today’s technology so impressive that many lines of motorsport have to be ‘pegged back’ I find myself drawn more and more to the historic side of our sport; I would love to have been around to see the thoroughbred racing cars of the 60’s and 70’s in period.  And so with there being no calendar clash between the opening rounds of the WEC and British GT in 2015 I found myself free to make a first visit to Thruxton on Easter Sunday for the HSCC revival meeting.

A packed schedule of races with a more than respectable start time lay in store for day 2 of the revival meeting with the Pre 66 touring car, Derek Bell Trophy and Guards Trophy events particular highlights.  The relaxed start to proceedings providing ample time to wander around the paddock for a closer look at some of the racing stars of yesteryear.

The Derek Bell Trophy, aimed at the F2 and F5000 cars of the 70’s saw the Lyons family responsible for 3 of the brutish open wheel delights.  Unfortunately Michael’s Gurney Eagle was not fit to take part in the event, however the HSCC were as brilliantly accomodating as ever and allowed him a run the family owned 1977 Hesketh 308e F1 car instead; oh what a shame (Said no one!)

It was an absolute pleasure to witness Lyons thrash the 3 litre V8 Cosworth powered machine around the Hampshire track; the huge rear wheels from the period providing massive amounts of grip, which combined with the raw grunt of the Cosworth engine allowed some of the fastest laps in years to be recorded.  As a comparison Lyons managed a 1:07.648 in Saturday’s race whereas the pole lap for the 2015 BTCC meeting was a 1:16.785!

Much debate surrounds the current F1 engines with many wanting a return to V8 power.  Whilst it would be nice to increase the decibel level the scream of the ‘glued to the track’ 2013 V8 formula 1 cars is dull in comparison to this late 70’s Cosworth.

On the day no other car was a match for the Penthouse liveried machine leaving Lyons, the master of historic F1 racing, to take a commanding 49 second victory over the Historic Formula 2 machine of Richard Evans and the Classic Clubmans specification Mallock of Mark Charteris.

The Historic Touring Cars always provide high quality entertainment; the traditional pose of a Lotus Cortina, Austin Mini or BMW 1800Ti being backed into a corner, almost Moto GP like, is something that is rarely seen in modern aero driven racing.  As it was Tim Davies, in his Lotus Cortina, was the class of the field; the Welshman managing to eek out an early lead before going on to take victory by a margin of 8.5 seconds at the chequered flag.  This may not have been the largest field of Touring Cars but the fast flowing nature of the circuit allowed them to be seen at their sideways best.

The Guards Trophy runners were split between the GT and Prototypes for the Thruxton meeting.  With the GT cars taking to the track the day before, Easter Sunday visitors were treated to a diverse grid of cars including the fabulous McLaren M1B and several Chevron B8’s.  On the day the nimble 2 litre Chevrons were no match for the Mighty M1B nor the Lenham Spider of Stuart and George Tizzard and while the Tizzards headed for the second step of the podium it was the Bill Coombs / Chris Drake driven McLaren which went on to claim a commanding 28 second victory.

Elsewhere,  Callum Grant made a late charge to claim Historic FF2000 victory, while Ben Mitchell was able to break away from the field to register a relatively comfortable Historic Formula Ford win. Ian Pearson stood on the top step of the Classic F3 podium while the busy Mark Charteris pedalled his Mallock to victory in the Classic Clubmans race after earlier registering third position in the Derek Bell Trophy.  Meanwhile the 70’s Roadsports race had it all with eventual winner James Dean, in his Lotus Europa, passing the majority of the field to claim victory after an early spin at the Club Chicane; an effort which was warmly appreciated by the knowledgable crowd. 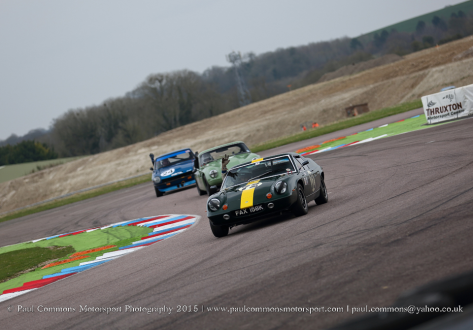 In just over 2 hours, with the glorious sound of the Hesketh F1 car still rattling around in my head, I was back home and contemplating my next slice of the historic racing action.  The Zandvoort Historic Grand Prix is now a firm entry in my diary and calendar clash permitting I hope to be back at Thruxton in 2016! 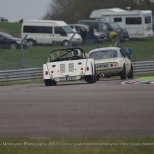 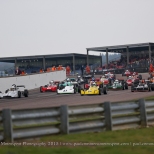 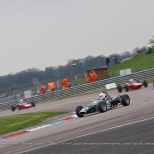 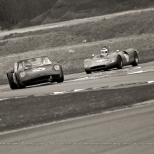 Fast forward 1 month and it was the 2.5 hour ‘1000km’ race for the 1964-71 World Sportscar Championship machines at the Donington Historic Festival which caught my eye; the jewel in the crown of my third visit to the 3 day bank holiday weekend event.

Weatherwise, a bitterly cold wind and low temperatures more akin to March than May was not kind to the opening day spectators.  However the variety of machinery both on display and taking on the fast undulating Donington Park National Circuit was more than enough to keep the moderate crowd entertained.

Unfortunately what had been light rain fall prior to the race start intensified as the cars readied themselves for the green flag; leaving the two Lola T70’s of Chris Ward (#9) and Leo Voyazides (#1), who had qualified on the front row of the grid, facing the daunting task of manhandling their huge Chevy engined prototypes around the damp opening lap.

And after successfully keeping them on the track, it was Chris Ward who managed to build a steady lead over the similar car of Voyazides, with Andrew Kirkaldy third, making a nuisance of himself in the #4 Chevron B8; the smaller engined car being much quicker through the corners but losing out on the long straights.

Further back Anthony Reid and Olly Bryant in their respective McLaren M1C and Lola T70 were making headway after conservative starts; both starting from the back of the grid having not appeared in the earlier qualifying session.  Bryant however was soon on terms with Kirkaldy and Voyazides, passing both at Hollywood before running into car problems coming out of the Old Hairpin; A sticky throttle not what you need in these conditions!  A safety car was required to remove the stricken Lola T70 from the outside of the Schwantz Curve which somewhat nullified the lead built by Ward.

Both leading Lola’s took advantage of the safety car however and made their first of 2 required pitstops; Simon Hadfield taking charge of the #1 Lola and Ward staying aboard the #9.  And so there was little between the cars as the track returned to green with Hadfield fancying his chances of taking the lead.  A spin exiting the Old Hairpin 2 laps later somewhat hampered his progress though leaving the white Lola some 30 seconds adrift.

Nevertheless Hadfield was soon into a rhythm and whilst finding it difficult to eat into Chris Ward’s lead initially, he had managed to cut the gap to 15 seconds by the time the leader made his second pit stop on lap 58.  In fact Hadfield was now flying on the drying track, so much so that Paul Gibson, now in the #9 Lola, dropped two laps back, albeit with the #1 T70 owing a final stop.

Indeed Hadfield made his final stop on lap 79, with Leo Voyazides climbing back behind the wheel, but such had been Hadfield’s pace in comparison to Gibson that the #1 T70 emerged from pit lane with an almost 1 lap lead over the similar pole sitting car.  But the tables were to turn again with Gibson now having the edge in pace over Leo Voyazides; quickly turning a 1 minute 19 second deficit on lap 80 into a 30 second gap by lap 95 and a less than 3 second margin as they entered lap 102.  And amazingly it was Gibson who was in the lead of the race by the end of the lap.

However Gibson was not able to break the tow and with just a few laps remaining the Greek driver was back on terms and making a move down the outside of the Craner Curves; a move which unfortunately would not pay off, sending the glorious T70 heading for a rather large off and allowing Gibson and Ward to claim the ‘1000km’ race victory.  A somewhat disappointing way to end proceedings but if you ever thought historic racing was merely a demonstration then think again!  Watching these incredible machines power sliding around McLeans in the drying conditions was further proof if needed! 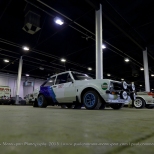 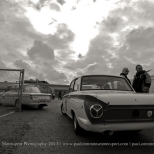 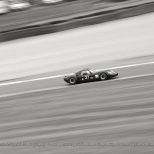 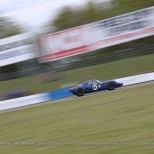 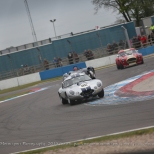 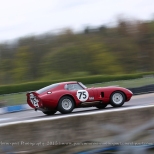 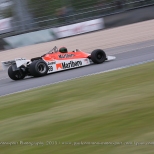 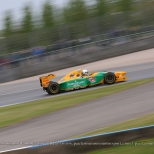 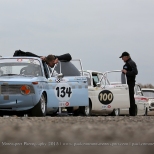 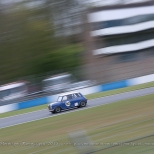 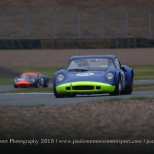 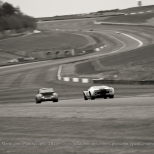 Yes the weather may have been poor but the event still delivered; the group B rally car and F1 demonstration runs adding further value to the many millions of pounds worth of automotive machinery on display.  I will definitely be back at the Leicestershire track for the Masters Meeting in early July on the fantastic Grand Prix circuit.

Before then though it is the back to the British Historic Rally Championship at the end of May with the Severn Valley Stages followed by the Legends support race at Le Mans in June and the Wolds Trophy HSCC meeting at the awesome Cadwell Park.  Stay tuned for coverage ….