Charlie Payne and Carl Williamson held off a late charge from 2014 winners Stephen Petch and Michael Wilkinson to claim the Malton Forest Rally honours by a mere 2 seconds; thereby taking victory on all three North Yorkshire based forest events in the 2015 calendar year! 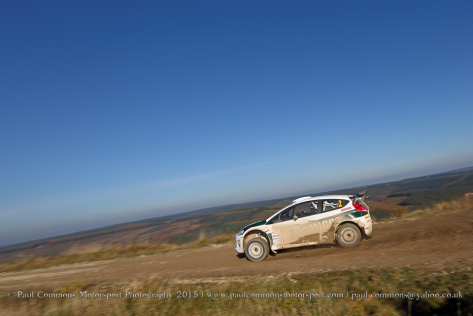 My arrival at the Hole of Horcum was met with glorious sunshine and abnormally warm temperatures, a far cry from the thick fog which plagued my long journey up from the Midlands.  And pleasingly, after a 7km hike to the top of Jerry Noddle in Staindale, the air remained perfectly clear providing the opportunity to take in the stunning views of Langdale before the competing crews arrived.

The 5.8 miles of Staindale represented stage 2 of the Malton Forest Rally’s scheduled 6 and whilst the majority of the field showed impressive commitment over the fast section of track between junctions 1 and 2 it was Charlie Payne and Carl Williamson who had stolen a march on their rivals by opening up an 8 second lead over the heavily Ford biased chasing pack.

2014 winners Stephen Petch and Michael Wilkinson gave away 9 seconds to their fast starting Amigos sponsored rivals on the opening stage of the event.  Whilst this did not appear a significant gap, the unseasonal weather meant the Langdale bogie time was well within reach of the leading crews; thus effectively deeming only 3 of the 5 remaining stages competitive.  Petch had a mountain to climb.

Sitting third at lunch, the WD40 sponsored Fiesta man did however manage to claw 7 seconds back during the reverse running of Staindale, but was left relying heavily on Payne making a mistake over the Langdale finale in order to maintain his Malton Forest crown.

Payne however was in a rich vein of form having already claimed 2015 rally victories on both the Yorkshire based Riponian and Trackrod events; the Ripon man maintaining his nerve to again beat the 7:22 bogie time and seal the overall Malton Forest Rally victory.  To the best of my google searching capabilities, claiming all three major forest rally victories in the North Yorkshire area, within a single calendar year is unprecedented.  Impressive to say the least!

Peter Stephenson and Ian Windress had been in touching distance of the front two all day but could not quite match the pace of Payne in Cropton 1 or either leading Fiesta on the reverse running of the stage later in the day; thus leaving the Focus WRC pairing to settle for the final step of the podium, just 12 seconds behind the eventual winners.  Meanwhile Rhys Yates and Tom Woodburn had a good run in their new Fiesta R5, snatching 4th from the S2000 Fiesta of Stephen Simpson and Andrew Roughead on the final stage of the day.

After many a duel in the Yorkshire forests in recent years, MK2 Escort heavyweights, Steve Bannister and Matthew Robinson would again lock horns at the head of the Historic and class H4 entry lists; a mouth watering prospect with ‘Banner’ knowing the North Yorkshire stages like the back of his hand and Robinson proving generally quick and flamboyant everywhere!

But while Bannister and Robinson sat an impressive 6th and 7th respectively at the halfway point, the evergreen Bannister with Dave Robson on the notes, had opened up a phenomenal 39 second historic class lead with 6th, 4th and 5th fastest stage times overall.   It is not as though Robinson, with Sam Collis alongside, was taking it easy; the pairing mighty impressive over Jerry Noddle and holding a 35 second margin over father and son crew Pete and Ash Slights in third!  This was Bannister at his very best. 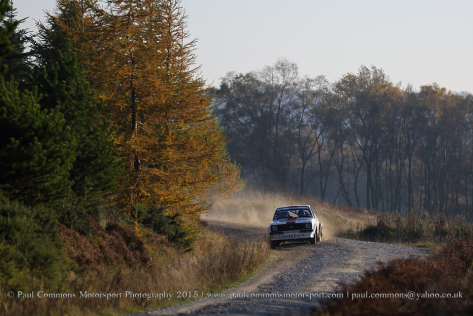 And while the damage was done in the morning, there was no let up in the glorious afternoon sunshine either as Bannister and Robson went on to claim historic rally victory by a whopping 1 minute and 2 seconds with a fantastic 6th position overall.  Robinson and Collis meanwhile consolidated their strong morning performance with 7th, while Pete and Ash Slights claimed 3rd in class and 10th overall despite a strong final stage from Ben Mellors and Tom Spencer in the fabulous Toyota Celica.

Fifth historic crew home was the mighty impressive Adam Milner and Ralloy founder, Roy Jarvis, in their H2 specification MK1 Mexico.  The duo recorded class victory by over 5 minutes from the Hilman Avenger of Keith Davison and Henry Richardson and had been holding 4th in category prior to Ben Mellors’ final stage push.  12th position overall however was a fantastic result for a 1600 machine!  Also repsonsible for the build of Bannister’s Ford, this had been a good day in the woods for Jarvis.

Peter Smith and Alan Walker finished the event in 15th position overall to claim class H3 honours in their Swift Caravans backed Opel Ascona.  Having been out in the Impreza, 6R4 and Kadett more often this year, Smith had clearly not forgotten how to drive the Ascona; going on to take class victory by more than 2 and a half minutes.

There may have been only one car entered in class H1, but just getting to the end of an event whilst seeded at car 65 in a Morris Mini is a mighty achievement in itself.  However the stages looked in pristine condition where I was and Peter Ellerby and Ian Jackson were able bring the car home in a very credible 49th position overall.

As expected Mat Smith and Giles Dykes excelled in the dry conditions to bring their very rapid Proton Satria home in 9th position overall, claiming class 1 honours by almost 4 minutes.  The speed carried over the top of Jerry Noddle and the final section of Langdale defied belief; it is difficult to comprehend that the car is powered by a 1400 motor although the driver is obviously not lacking in the talent department!

A last minute entry for Martyn Hawkeswell and Nick Welch was rewarded with top spot in class 3 and 16th position overall; the MK2 Escort crew beating Andy and David Gibson to the class victory by just 8 seconds.  In fact the Gibson brothers had been leading the class until losing 10 seconds in the reverse of Staindale.  Separated by just 1 second heading into the final stage, Hawkeswell then sealed the class victory by setting 14th fastest stage time overall.

Class 4 victory went the way of Chris White and Chris Dewsnap in another MK2 Escort.  The Ford pair were quick out of the blocks and never looked back, claiming class honours by more than 2 minutes with 19 position overall.  Phil and Mick Gallagher would have been amongst the pre-event class favourites, however the Ti Rallyschool pairing had a mixed morning, losing 2 minutes in stage 1, before setting fastest class time in Staindale and then retiring one stage later! 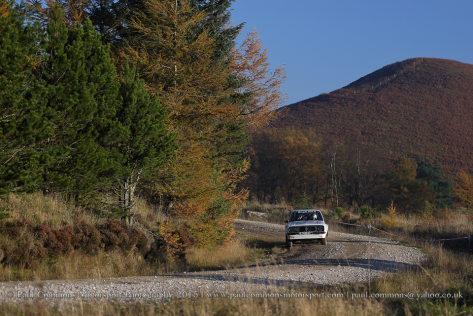 Class 2 meanwhile was an all Peugeot affair with the 206 of Barry Lindsay and Caroline Lodge getting the better of 205 crew Ben Cree and Chris Row to claim class top spot with 21st position overall.  There was little to choose between the two crews all day but Lindsay just appeared to have that little bit more pace up his sleeve, taking 5 of the 6 class stage victories and building a winning margin of 29 seconds by the end of the event. 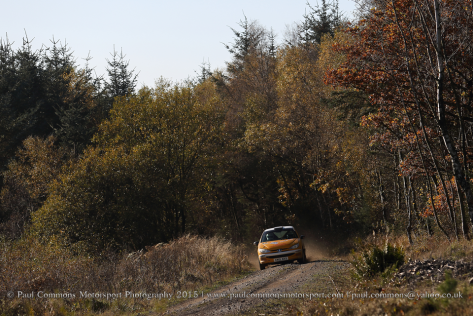 Much like 2014 this had been one of the best days rallying of the year.  From a spectators point of view Malton Motor Club and Clitheroe and District Motor Club had done a fantastic job of organising the event.  In my view, providing full stage maps on the website, in stark contrast to many other events, is a brilliant initiative; what better way of highlighting where the dangers are to the casual spectator?

In full knowledge of the rally route I was able to take in both Stages 2 and 6 by foot; a 19.5 km round trip from the Hole of Horcum made all the more worthwhile by the fantastic weather, beautiful North Yorkshire countryside and some top commitment from the leading crews.  The 3.5 hour return trip and stiff limbs little sacrifice for a great day of Motorsport.