Melvyn Evans and Patrick Walsh recorded a dominant Harry Flatters Historic Rally victory whilst 4th overall was enough for Paul Barrett and Dai Roberts to consolidate their position at the head of the BHRC title race.

The Harry Flatters Rally represented the first taste of Asphalt for the BHRC regulars with the 44 car historic entry facing over 73 stage miles across the very technical military roads of Epynt.  And whilst the likes of Nick Elliott and Matthew Robinson had elected to miss the Welsh tarmac round, entries at the sharp end from Epynt regulars, Melvyn Evans and Guy Woodcock, added some additional spice to an already impressive list.

The 2015 event had seen a fabulous battle for victory between Jason Pritchard and Melvyn Evans, with the 2015 BHRC champion mastering the wet conditions to get the better of his rival on that occasion.  And after stage 1 it appeared that the rapid Welsh duo would again feature heavily at the top of the time sheets in 2016 with Evans this time the right side of a six second margin.

But just as anticipation of another epic duel began to build, Pritchard and co-driver Clarke soon found themselves condemned to their third BHRC non finish in a row courtesy of a stage 2 engine failure.  There is now no room for another retirement if the unlucky North Road Garage sponsored Escort crew are to maintain their championship crown.

Evans, with Patrick Walsh alongside, meanwhile had built a 28 second lead by the end of stage 2 and from then on in was never really challenged as he and Walsh eased away from their opposition over the remaining three stages to claim a comfortable 1 minute and 9 second victory over leading BHRC crew Neil Williams and Peter James. 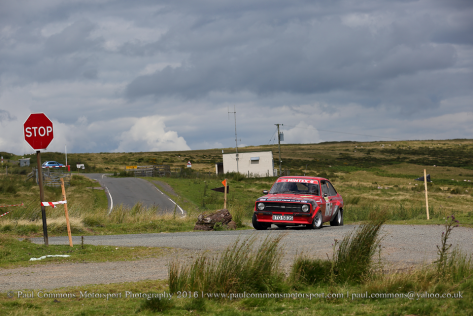 Second was an excellent result for Williams and James who grabbed the position from the unfortunate Pritchard on stage 2 whilst holding off an early challenge from Rob Smith and Alun Cook.  In fact the un-fancied F2 Spec MK2 Escort crew were never outside the top three stages times as they went on to claim a well deserved but rather lonely runner up spot and maximum BHRC points.

Lying third after stage 2, Smith’s strong early showing ended on the very next stage; a rather large off on the approach to the German village allowing  Guy Woodcock and Richard Crozier to slip into the final podium position with Simon Tysoe, Paul Barrett, Terry Brown and Barry Jones covered by just 6 seconds in the battle for fourth.

Much like Williams, Woodcock was now all on his own in third, 34 seconds behind second overall but 29 seconds in front of Tysoe in 4th.  And 4th and 5th fastest times through the final two stages was enough for he and Richard Crozier to not only claim the final podium position but also wrap up maximum RAC Asphalt points on what was the third round of the new for 2016 championship.

In the close battle for 4th, Second quickest time overall on stage 4 would promote Barrett and Dai Roberts, in the leading Pinto engined machine, firmly into the hotly contested position.  The Northern Irish / Welsh duo ending the day as second BHRC registered crew home after managing to hold on through the final stage, leaving Barrett to sit comfortably at the top of the BHRC title race.  2016 champions?  It is now a serious possibility. 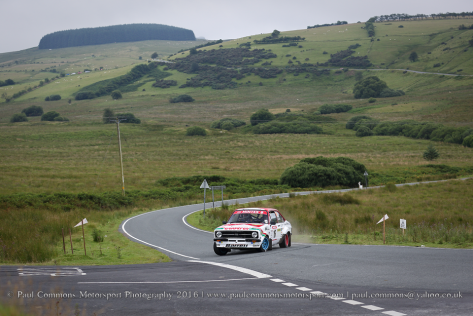 Barry Jones and Iwan Griffiths meanwhile were six seconds quicker than Simon Tysoe and Paul Morris on stage 4, tying the MK1 Escort crew on total time as they headed into the final stage.  Unbelievably the duo would set the exact same time on stage 5 with Jones missing out on fifth courtesy of the stage 1 tie breaker.  Thus leaving Tysoe and Morris to round off another strong drive with a top 5 finish to nicely compliment another maximum category 2 points haul.

Elsewhere in category 2, an electrical problem had ended the challenge early for regular front runners Stanley Orr and Guy Weaver.  This left the way clear for Wayne Bonser and Rich Aston to take class C3 honours from the similar MK1 machines of Ian Drummond and Jon Ford.  Class C2 meanwhile was claimed by the Hillman Avenger of Steven Powell and Jamie Hawkins. 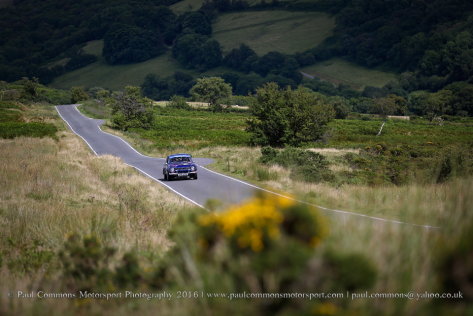 14th overall was another top result for class D2 winners Chris Skill and Tom Jordan.  The East Midlands crew finishing within 5 minutes of the eventual winners which given Evan’s calibre, as one of the quickest men on Welsh tarmac, is no mean feat!

Further back, Ford Cortina GT crew, Bob and Dale Gibbons, were again the pick of the category 1 field, bringing their class B3 machine home in 19th position overall to claim category honours by over 6 minutes from the class winning B1 Morris Mini of Ken Pryce and Don James.

Elsewhere, Paul Mankin and Desmond Bell finished 23rd overall and first in class B5 whilst Bob Seager and Simon Hannam claimed class B2 top spot in their MG Midget. 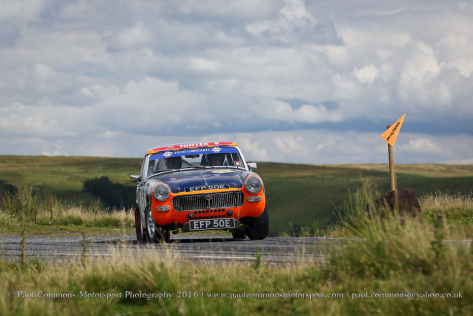 Whilst a little short on historic entries, it had been a good day on the Epynt ranges.  It is a shame that Pritchard was forced into early retirement as a close fight to the end between two of the quickest tarmac shod Escort pilots in the country would have been just what the doctor ordered.  However, the ever improving weather made for a pleasurable afternoon in one of the most scenic areas of Wales.  More of the same please for both the Red Dragon in a few weeks time and most importantly for my first ever trip to the Manx in mid September.  I genuinely cannot wait!