Since my last visit in 2015, the mid Wales based Nicky Grist Stages has gained British Rally Championship status, and with it, an additional day of action of the very fast Tarmac roads of Epynt; uniquely making the event the only multi surface fixture on the 2017 BRC Calendar.

The 2017 British Rally Championship hasn’t quite attracted the same level of interest as it’s re-birth year however and thankfully the modest 28 international entries were swelled somewhat by a healthy 102 national B competitors taking part in the Saturday only BTRDA round; a pivotal round 6 of 8 in the 2017 championship.

There are few better views in British rallying than that offered by Route 60 and from our vantage point between junctions 5 & 6 it was easy to see why Osian Pryce and Dale Furniss had taken an early lead in their Spencer Sport Fiesta R5.  Their commitment over the infamous crest was second to none with this moment alone making the 7 hour round trip worthwhile!

But, having been quickest on 5 of the 8 gravel stages and having built a lead of just over 19 seconds by the overnight halt, things would all go wrong for the Welsh pairing as the event headed for the Tarmac.  Disappointingly, having played their joker, the pre-event championship leaders would initially pick up a five second penalty before being forced into retirement on stage 12 with fuel pump failure.

This left the door wide open for Fredrik Ahlin and Torstein Eriksen to claim their 3rd win of the year.  Just eight seconds in arrears heading into SS12, the Swedish/Norwegian pairing were more than worthy winners and will look to consolidate their championship lead over the final 2 Asphalt rounds of the season. 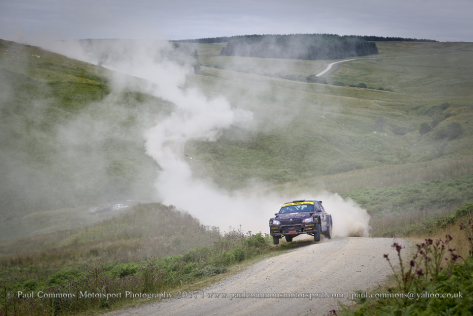 Whilst not able to benefit from the same pre-event recce as the BRC competitors, the action at the front of the BTRDA field was just as fierce; a three way fight for the event win soon developing between the WRC fiesta’s of Peter Taylor and Stephen Petch and the R5+ machine of Callum Black.

Two early stage wins for Peter Taylor, co driven by Andrew Roughead, had seen the Carlisle man take an early lead before a puncture in SS4 would drop them back to third.  Taylor would fight back during the afternoon loop however, claiming 3 of the 4 stage wins, but the overall victory proved just out of reach.

Whilst consistency had been the key for Stephen Petch and Michael Wilkinson to emerge as leaders following Taylor’s problems in stage 4, it was a turn of pace in stage 7 that would ultimately seal victory.  Callum Black and Peter Taylor were just a respective 5 and 6 seconds in arrears heading into the second running of the Halfway stage, however a clear fastest time overall for the Bishop Auckland man ensured he and Wilkinson would take a relatively comfortable 9 second margin into the Crychan finale.  And whilst Taylor claimed his fifth stage win to snatch second from Black, Petch maintained his nerve to record an 8 second victory.  A victory which puts him right back in the title hunt with just the Woodpecker and Trackrod to run. 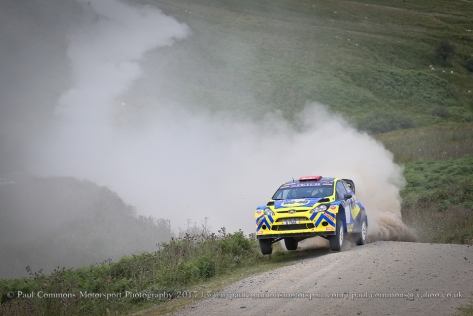 The production based Group N machines excelled in the dry and dusty conditions with eventual class winners, Sacha Kakad and James Aldridge, finishing the day in an excellent 5th position overall.  Kakad didn’t have it all his own way however; the evo X driver first having to fend off a fast starting Patrick Naylor and later an afternoon charge from the vastly experienced Richard Hill.  Naylor and Hill’s victory challenges would end with time losses in SS4 and SS7 respectively however, leaving the consistent Russ Thompson and Andy Murphy to claim second, just 5.7 seconds in arrears.  An apt result given Kakad and Thompson shared fastest time overall on the days third test.

Class B13 honours would go the way of Subaru crew,  Toni Carannante and Simon Coates, with 11th position overall; a class which Dylan Davies and LLion Williams had dominated before retiring with power steering failure in SS6.  Davies’ unfortunate demise did however throw the battle for class victory wide open with just 4 tenths separating Carannante and the Mitsubishi Evo 6 of Simon Rogers as they approached the final 2 stages.  And despite Rogers, with Wyn Davies alongside, recording a time 6.5 seconds quicker in the Crychan finale, Carannante and Coates would take class victory courtesy of a super quick pass through Halfway.

With 13th position overall, Richard Sykes and Simon Taylor claimed an excellent Silver Star victory in their Citroen DS3; the Black Country/York based pairing dominating proceedings in both class B12 and the two wheel drive category to take victory by almost 50 seconds.

Second in category, and 16th overall, was the MK2 Escort of B11 class winners Owen McMackin and Lee Taylor.  Strong performances in both runs of Halfway and Crychan the deciding factor as they headed home another MK2 in the hands of Nick Dobson and Steve Pugh and the Andy Davison/Tom Murphy piloted Sunbeam.

Just one place further back in 17th were 1400 victors Dave and Toby Brick.  The “Flying Farmer” was at his flamboyant best over the morning run of Route 60 and would find himself locked in a day long battle for class victory with the Talbot Sunbeam of Chris Powell and Jim Lewis; the duo separated by just 4.2 seconds as they headed into the final stage.  Unfortunately for Powell however, the Herefordshire Raceway backed machine would not emerge from stage 8 leaving Brick to take a very hard fought victory.

Bob Vardy and Keaton Williams fought off a healthy gathering of B10 rivals to claim class victory in their Ford Fiesta R2.  Lying second at the mid point service, Barry Jordan and James Gratton-Smith had closed the gap to just 2 seconds after the second running of Route 60 but would ultimately drop to third behind another R2 in the hands of Jordan Reynolds.  Neither of whom quite had the pace to catch Vardy and Williams as the pairing registered a 12.9 second class victory with 22nd position overall.

Steve Ward and Mike Crawford enjoyed a strong run over the Mid Wales gravel to claim overall Historic and class H2 honours with 33rd position overall.  Josh Browne had taken an early lead in a similar MK2 Escort but was forced into retirement after stage 4 leaving the way clear for Ward to take victory from the H3 class winning Ford of Paul Gunter and Jack Walby.  Meanwhile Class H1 would go the way of Ken Davies and Alan Jones in their Volvo Amazon. 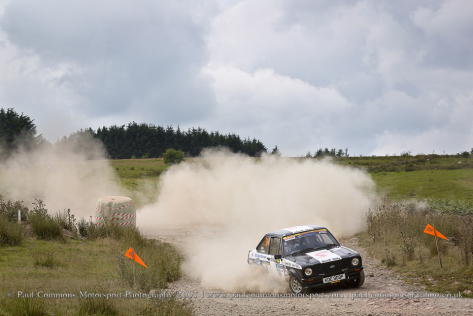 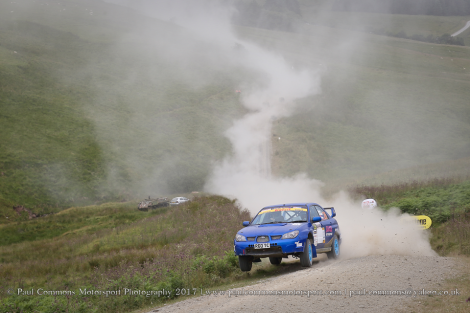 Having not managed to attend any BTRDA events in 2017 prior to the Nicky Grist it soon became apparent what I had been missing.  The variety of machinery is the key, made even better by the inclusion of the BRC competitors; the extra commitment of whom, probably aided by the recce, was at times simply breathtaking!

The addition of the BRC certainly helped bolster entry levels too; something which the Trackrod Rally in late September will be hoping to replicate as the event closes out the season for both the BTRDA and BHRC championships.  With many events struggling for entries in 2017, maybe searching for more ways to entwine the 3 major UK championships is the answer …