Ollie Mellors and Max Freeman stylishly proved the pace of the Proton Iriz R5 on the North Wales based Cambrian Rally; the pairing fighting off a large contingent of R5 and WRC machines to claim a maiden BTRDA victory.

The BTRDA season opening Cambrian Rally had by no means attracted the largest of entries, but what it did boast was a quality filled top 20.  And with this in mind, few would have expected Ollie Mellors and Max Freeman, in the brand new Proton Iriz R5 to head the time sheets as the rally returned to the Llandudno finish; especially given the pairing had never even met prior to the event and many a WRC Ford were seeded in front of them.

The technical nature of the Snowdonia National Park stages more often than not reward local knowledge, skill and bravery however, and, despite the power disadvantage, it was the R5 cars which shone in the glorious North Wales sunshine.

Indeed, it was BRC regular Matt Edwards who leapt into a massive 16 second lead after the first run through Penmachno South, only for his victory challenge to be dramatically cut short when clipping a hidden log in stage 2.  Under new regulations however, Edwards and co-driver Darren Garrod were able to re-join the event for the final four stages thus gaining valuable seat time and continuing their utter domination of the stages; claiming stage victories by 6, 12, 8 and 4 seconds respectively!  A case of what might have been …

“To finish first, first you have to finish” is well known phrase in rallying, and Mellors was in prime position to take advantage of Edward’s indiscretion, taking a 7 second lead after stage 2 and managing to hold the Focus WRC of Paul Bird and Jack Morton at bay for the remainder of the event to record a mighty impressive 6 second victory, the most significant to date for the new Iriz R5.  An even more remarkable feat when you consider the Proton suffered a puncture in the penultimate stage.

Bird may well have fancied his chances against R5 machinery but, following a 2 year ban, will have been more than happy to commence his full time BTRDA return with maximum points; reward for the first championship registered crew home in second place overall.

Meanwhile, current champions Stephen Petch and Michael Wilkinson in the WRC Fiesta, made a strong start to their title defence.  After a conservative approach to stage 1 saw them lying 8th overall, the WD40 sponsored Ford crew upped their speed as the day went on to eventually round out the podium positions, just 30 seconds shy of the eventual winners.

Further back, Dylan Davies and Llion Williams claimed B13 class honours with 8th position overall in their Subaru Impreza whilst Russ Thompson and Andy Murphy were the first “showroom” class crew home in 10th aboard their Mitsubishi Lancer Evo 9.

And, finishing just outside the top 40, Tom Coughtrie and Baz Green claimed the first ever class H4 victory for pre-91 historic machinery in their ex-works Mitsubishi Galant VR4.

The battle for 2 wheel drive victory was fought out by a wide variety of machinery and it was Ieuan Rowlands in the freshly built Historic specification Avenger who was quickest out of the blocks.  Usually aboard a Volvo engined MK2, the Ffestiniog resident, with Emyr Hall alongside, was using the event to shakedown the BRM engined machine ahead of a full British Historic campaign and held a 13 second Silver Star category lead until a stage 4 puncture dropped them back.

17th, 14th and 15th fastest time in the remaining three tests would however secure the local crew third place and top spot in the historic category.  On this evidence they will be at the sharp end of the BHRC battle when the series kicks off on next month’s Rally North Wales!

John Rowlands, in his usual B11 class MK2 Escort, would head a 2WD top ten remarkably covered by just 52 seconds following brother Ieuan’s issues in Alwen, themselves lucky to still be in the event following a huge moment in stage 1 (see Facebook!) And using his local knowledge to full effect was able to pull away from the field over the afternoon stages to register a relatively comfortable Silver Star victory for he and Glenn Latham.

2nd in the Silver Star category represented a fantastic result for Chris Powell and Jim Lewis in their 1400 Talbot Sunbeam.  The Herefordshire based duo putting in an incredible performance to end the event just 24 seconds behind John Rowlands in 17th position overall and take the 1400 category by over 3.5 minutes!

Owen McMakin and Lee Taylor registered class B12 victory with 24th position overall in their MK2 Escort after a day long battle with Richard Sykes.  Sykes was in fact leading the class by 4 seconds in his Citroen DS3 before ending the day in a stage 6 ditch.

Josh Browne and Jane Edgington would wrap up a 23 second combined H1 & H2 historic class victory with 26th position overall whilst the second placed MK1 Escort crew of Ernie Graham and Robin Kellard were left to rue the 26 seconds lost on the opening 2 stages of the event. 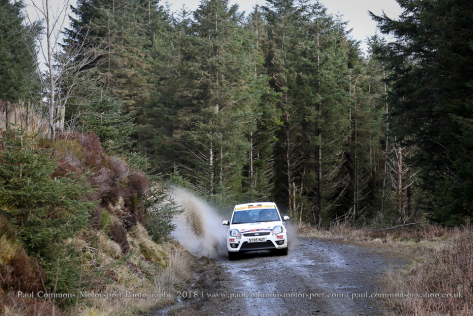 Rounding out the class winners, Sam & Liam Johnson and Matthew Baddeley & Shaun Hughes claimed the respective RF1.4 and RF2.0 classes in what turned out to be a tough event for the small contingent of Rally First crews.

Concentrating on the front of the field you could be forgiven for believing UK Forest Rallying to be in good health.  However just 4 Rally First cars and not that many more 1400 machines started the Cambrian; the ludicrous MSA running order regulations surely contributing to the decline in numbers.  The second running of Llyn Elsi was described as rough by the top runners so you can only imagine how it felt for the smaller runners at the back.

Rally 2WD appears to be the way forward for some rallies but this format is unlikely to suit the BTRDA Championship and Nicky Grist, amongst others, has called for a return to running 2 wheel drive and historic machinery nearer the front.  Let’s hope common sense prevails before too long as with just over a week to go before round 2, the Malcolm Wilson Rally, the entry list is not exactly bursting at the seams!

However, this should not deter from was ultimately an excellent Cambrian following the snow and ice enforced cancellation of last years event.  The battle at the sharp end was as close as ever and despite long delays early on no stage mileage was lost, for which the organisers deserve massive credit.  But whilst the Cambrian has BRC ambitions for 2019, the question that has to asked is how sustainable the current BTRDA entry levels are? especially given last seasons hike in forestry commission charges.  Changing the running order may well be the only viable solution …