A stroll through the packed recently re-surfaced Donington paddock, in glorious early morning sunshine, before a stonking fry up in the fabulous brand new Garage 39 cafe dispelled any initial disappointment at some key omissions from the 2018 Donington Historic race schedule (FIA F2 & late 60’s Sports prototypes).  A lunch time pint in the same venue’s outdoor seating area confirming my belief that this was a much better use of the space!

This represented my first visit to the Leicestershire circuit since it has been fully MSV’d, and whilst I was slightly sad to find the blue & white circuit colours and traditional toilet huts replaced by respective MSV red & white and pop up blocks, you cannot deny that the future of my favourite UK circuit is in good hands; a visit to one of their other excellent venues proof if ever it were needed.

And, having only managed to slot a Saturday visit into my diary this year, it was pleasing to see that the essentially Motor Racing Legends organised event had managed to shoe horn 10 mostly packed grids into the first race day of the festival which was splendidly lead off by the Pre-61 Formula Juniors.

Unfortunately cut short by a late red flag, the race featured a fantastic duel between the self built U2 of Ray Mallock and the Terrier of Chris Drake;  a battle which would see both men share spells at the front of the field before Drake made the decisive move at Mcleans on lap 11, with Pole sitter Mallock denied one final shot at victory when the aforementioned red flag brought the race to a slightly premature end.

Whilst not containing the lead changes or the depth of field of race 1, the opening Super Touring Car Challenge event of the weekend did provide excitement in the form of former BTCC champion John Cleland taking the battle to regular front runner James Dodd.  But whilst able to close on the leading Honda Accord  through the early and later parts of the race, there was an underlying feeling that Dodd ultimately had things under control.  And so it was no real surprise to see the double 2017 winner again standing on the top step of the podium.  Behind, John Pearson progressed well through the field, passing the BMW M3 of Harry Whale late on to round out the podium positions in his ex Emanuele Pirro Audi A4.

Whale may well have missed out on a podium position in race 2 but would later make up for it in style in the hour long Historic Touring Car Challenge race.  Having taken over from Dad Nick at the first opportunity, Whale the younger would rapidly extend the pole sitting M3’s advantage at the head of the field to take a commanding victory of more than 36 seconds by the end of the event.  A somewhat nostalgic moment for father and son given this was the same car that Harry watched Nick race during the 1990 BTCC season. 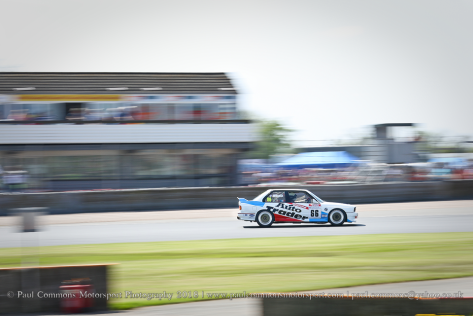 The race for the remaining podium positions was far less clear cut however with all parties appearing to struggle in some capacity.  Indeed, the Dave Coyne / Mark Wright piloted RS500 showed strong pace early on, duly setting the fastest lap of the race before suffering with a misfire and braking issues.  The Zakspeed Escort of David Tomlin appeared to be in contention also until dropping back with a 10 second penalty for track limits followed by a potentially linked puncture.

As it was the podium positions were eventually filled with 2 crews who made the best of their issues.  Mark Smith in his M3 had initially proved tough opposition for the similar Whale machine, only for son Aaron Moulton-Smith to drop back to 7th shortly after taking over.  A series of very quick laps late on would however rescue the situation and ensure not only a BMW M3 but also a father and son 1-2.

Last year’s winners Steve Soper and Chris Ward would round out the podium positions.  Soper, in the Bastos Rover, had struggled during the opening part of the race with a bounce at the front end that even JD Classics could not dial out!  The versatile Chris Ward managed to find a way to to drive around the problem however; the podium salvaged probably feeling like a victory given the circumstances!

In what was billed as a Ferrari / Aston Martin battle, it was the Wolfgang Friedrichs / Simon Hadfield piloted DB4GT which claimed the Historic Motor Racing News organised Pre 63 GT victory after the Halusa’s smoking “Breadvan” was forced into retirement in the early part of the race. 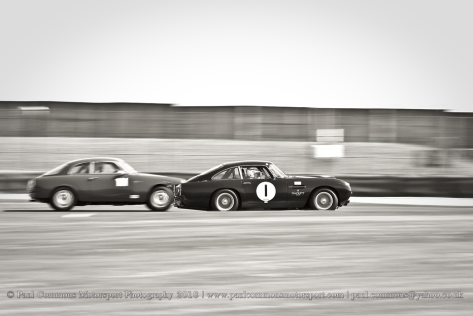 Having been installed at the earliest possible opportunity, local man Simon Hadfield still had to battle hard for the win however, passing the far from slow E-Type of James Cottingham and Patrick Blakeney-Edwards Cobra amongst others before going on to record an impressive 26 second victory for the British Marque.

By far the fastest machinery competing at the festival were the F2 and F5000 machines taking part in the Derek Bell Trophy.  In a category where Michael Lyons is rarely challenged let alone beaten Jamie Brashaw put in a great drive aboard his March 73A.  And, whilst it was Lyons who would ultimately cross the line first in his Lola T400,  fastest lap went the way of the Yorkshireman, underlining his competitiveness in this event.  Watching both drivers power out of the Roberts chicane to record sub 1.05 minute lap times was a sight to behold!

Having struggled in the Rover earlier on, Soper was back to his brilliant best in the Under 2 litre Pre-66 Touring Car event; the touring car legend part of a 3 way battle for top spot in his Lotus Cortina.  Indeed both Soper and regular sparring partner Andy Wolfe, in his Cortina, shared the lead before Soper found himself several seconds adrift as the cars emerged from their mid-race pitstops.

By this time however Wolfe was struggling with his brakes and both Soper and, regular winner at Donington, Max Banks were closing in fast.  Unfortunately however a red flag cut short the race by 3 minutes, denying Soper the chance of victory and the crowd of a grandstand finish.

The Woodcote Trophy is always a highlight of the Donington Historic Festival and this year was no exception.  A great variety of cars found themselves at the sharp end of the action, but it was the Gary Pearson piloted D-type which quickly worked it’s way passed the pole sitting Maserati 250S of Richard Wilson to hold a 6 second lead over the Cooper T38 of Fred Wakeman with Carlos Monteverde’s D-Type in third as the pitstop window approached.

Pearson would be the first to stop, allowing brother John to take over the leading D-Type, whilst, without a moments rest, Gary would jump straight into the Monteverde machine just 1 lap later.  Meanwhile the very rapid Martin Stretton was strapped into the Maserati and it wasn’t long before the pole sitting machine was passing John Pearson for second, with Gary Pearson following suit some 10 laps later (bizarrely passing the car which he had started the race in).

At the front of the field however, Wakeman was enjoying a clear run, and courtesy of a string of consistently fast lap times was able to allow Patrick Blakeney-Edwards to emerge from their pitstop with a clear lead that even Stretton and Pearson could do little about.  In fact the T38 was near untouchable on the day, with Wakeman and Blakeney-Edwards going on to record a more than comfortable winning margin of 26 seconds.

After 2 aborted starts, pole sitter Cameron Jackson eventually took command of the Pre-64 Formula Junior race.  The Brabham BT2 pilot just having the edge on his rivals to claim a 2 second victory.  After losing out at the start Jack Woodhouse would snatch 2nd at Hollywood on lap 9 from the similar Lotus 20/22 of Sam Wilson.

The Pre-60 HRDC Touring Greats event was the penultimate of the day and it was no surprise to see regular winners, Andrew and Mike Jordan, emerge as victors in their Austin “GT40”.  There appeared to be a chance of an upset when James Colburn’s well timed pitstop left him leading the safety car train, but it took less than a lap of green flag running for Andrew Jordan to re-take the lead.  Meanwhile Neil Brown would also pass Colburn in the second half of the race to claim second in his Austin A35.

A huge field of largely E-types took to the track for the final race of the day, the Jaguar Classic Challenge for pre-66 machines.  In a grid full of quality (drivers and cars) it was Ben Short who lead much of the early running before slowing in the second half of the race with what turned out to be driver fatigue.

Meanwhile Julian Thomas quickly progressed to second after a string of fastest lap times, only to suffer the set back of a 10 second penalty, resulting from a jump start.  But such was his and co-driver, Callum Lockie’s pace that by the time Short emerged from pit-lane (after his later stop) they would find themselves with a net 6 second lead.

Lockie would then continue the cars strong pace over the remainder of the stint which enabled the Scot to maintain the lead despite a second penalty; this time a drive through for a short pitstop.  There was just no stopping the #92 E-type in the evening sunshine.  Behind, despite suffering in the heat, Ben Short just managed to hold off a fast closing John Pearson, in the Gary Pearson started machine, to claim a well deserved second.

Despite the event being slightly too Touring Car focused for my liking, I had a fantastic day in the, for once, glorious bank holiday sunshine, a welcome change from the single digit temperatures often experienced at this event.    Exciting times are ahead for the Leicestershire circuit, now that MSV are behind the wheel.  I just hope major changes are well off the radar as, from a viewing perspective, Donington remains near perfect.