Billed as the perfect antidote to the British Grand Prix, the Donington Masters Festival, headlined by the Masters Four Hours, met all expectations as Roger Wills and James Littlejohn claimed a hard fought victory in their stunning Ford GT40.

The Independence day four hour entry list fittingly included 7 Ford GT40s, the American brand’s answer to Ferrari’s mid-twentieth century Le Mans dominance.  However only 5 managed to make the start, as high temperatures in excess of 25 degrees played a part in both the Bryant’s machine and that of David Cuff and BTCC legend, Steve Soper, failing to take the green flag. 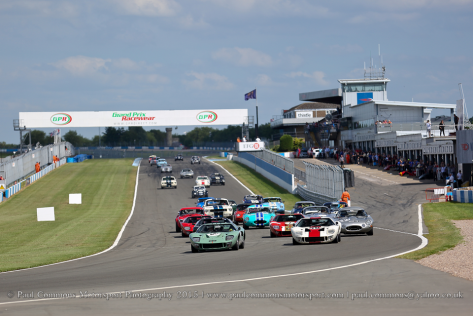 And 5 soon became 3 before the first hour had concluded as both the Richard Meins / Steve Farthing and Craig Davies / John Young GT40s were forced into retirement; the latter parking up on the inside of Swantz curve after their GT40 emptied itself of fluid on the run down to the Old Hairpin.  Conversely, the remaining 3 up front were running well, with the #40 of Tony Wood and the Silver Fern liveried machine of Roger Wills dicing for the lead while pole sitter, Jason Wright, held onto third.

As the race entered the second hour however it was New Zealander Roger Wills who had slipped into the lead before making his first of 2 required pitstops during the first safety car period.  Meanwhile, Wood, who had not lost touch with the #5 machine, chose to stay out and re-take the lead of the race

In fact it was 1 hour and 45 minutes into the event before Wood brought the #40 GT40 into pit lane to hand over to Martin Stretton, bringing to an end a monster stint for the Scotsman which had seen him build up an almost 2 lap lead over the rest of the field.  Upwards of 40 degrees was being reported in the cockpit, making Wood’s efforts even more impressive!

But just as things started to look rosy for the white and red Ford, Stretton was back in the pits with oil pressure problems, undoing much of Wood’s hard work and leaving the lead battle between the now much improved green #46 machine of Michael Gans and the new pilot of #5, James Littlejohn.

Gans was quick but Littlejohn had the edge, the 27 year old Warwick man putting in a great drive over the next 15 laps to halve Gans’ lead to 19 seconds before a second safety car was deployed on lap 75.  And with both cars taking the opportunity to make their mandatory second stop, it was Andy Wolfe, now aboard Jason Wright’s #46, who got the better of the safety car timings to gain almost a lap on Roger Wills who had climbed back aboard the #5.

The second half of the race would feature 2 further safety car periods, making it crucial that Wills did not lose a lap to Wolfe.  And whilst Stretton had held the lead until pitting for the third time on lap 91, his lap lead on the rest of the field, whilst nursing a broken exhaust and misfire, was not enough to keep him and Wood in contention; thus leaving a straight fight to finish between Wills and ace historic car preparer, Andy Wolfe.

Having managed to stay on the same lap as his rival, Wills took advantage of the third safety car to sit right behind Wolfe at the restart, the bit now firmly between his teeth as he took the lead of the race on lap 91.  The favour was returned less than ten laps later however following the return to green after a fourth safety car intervention.  This race was well and truly in the balance with just 30 minutes remaining.

Once in the lead, Wolfe was not able to break the tow, and you just sensed that Wills had something extra in the bag.   As if to prove onlookers right, the vastly experienced historic racer made the decisive overtake on lap 106; Wills then following this up with two consecutive sub 1:45 lap times while Wolfe lost vital seconds with a spin at the Old Hairpin.  As quick as Wolfe had been during the race there was no way back from here, allowing the Wills / Littlejohn piloted GT40 to cruise onto the top step of the podium.

Whilst the powerful GTP class Fords filled the podium positions, Phil Keen and Andrew Haddon brought the glorious AC Cobra home in 4th position overall to claim the GTB class honours.  Having been troubled early on by the E-Type of Marcus Graf Von Oeynhausen-Sierstorpff, the Cobra crew spent the second half of the race in a close battle with the Lotus Elan of David Tomiln and Richard Meaden. 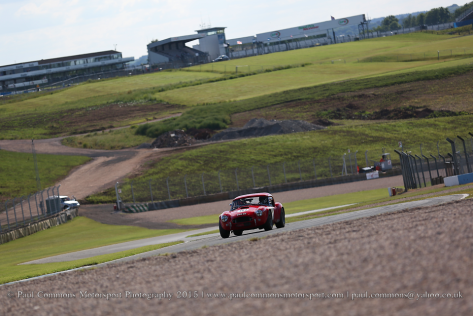 In the end the Cobra had the necessary grunt to get the better of the very well driven Elan in the final hour of the race, while fifth place and top spot in class GTA was just reward for a stunning drive by Tomlin and Meaden.  In fact the final results mask the story of GTA which featured a great battle with the TVR of the Sean and Michael McInerney.  While Tomlin and Meaden showed greater pace as the race went on, it was the TVR who had the upper hand following the second round of pitstops.  However just 3 laps later an unscheduled third stop for the father and son crew effectively ended their challenge for class honours; 6th overall however represented a more than respectable result. 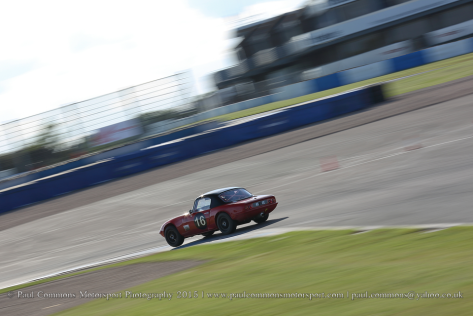 The number #13 Mustang in the touring car class seemed to have class victory in the bag with 1 hour to go; Rupert Cleverly, Simon Garrad and Charles Allison holding a three lap lead over the similar machine of Nicholas Ruddell, Robert Crofton and Nigel Batchelor.  However, disaster struck on lap 90 as the #13 car stopped on track on the run up to Goddards.  Having been helped back to the pits and then fixing the apparent electrical fault with little time loss they appeared back on track for class victory.  Luck was not on their side however as they were back in the pits for good just 10 laps later, gifting class victory to Ruddell, Crofton and Batchelor.

With only 15 of the 29 starters taking the chequered flag, this had been a proper test of endurance.  The heat added an extra element for the crews to battle against which made winning the race even more rewarding for Wills and Littlejohn.  I really hope that this event makes a return in 2016 as it would be a great tragedy if the Masters 4 Hours of Donington turned out to be a one off!

Few motor races are as entertaining as the Pre 66 touring cars where Amercian Muscle in the form of Ford’s Falcon and Mustang are pitched against the smaller engined, yet more nimble, European Mini and Cortina.  In particular, the speed carried through the corners by John Cooper’s finest often defies belief, making them a true match for their more powerful state-side rivals in certain conditions.

A dry race-day however gave a clear advantage to the aforementioned muscle but it was Henry Mann, son of racing legend Alan, who managed to get the jump on the front row starting Mercury Cyclone of Roger Wills and the pole sitting Falcon of Rob Hall.  In fact, once into the lead, the Mustang driver never looked back as he went on to record a convincing victory of over 50 seconds. 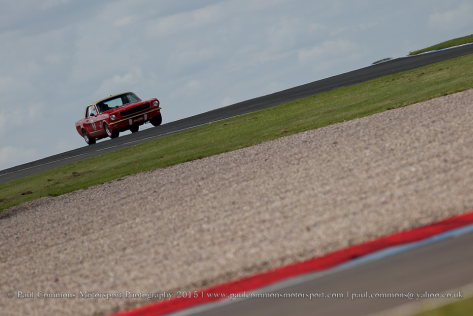 The battle behind was far from clear cut however, with 4 hour race winner, Wills, having to fight off the Ford Falcon of Rob Hall and whole host of Minis, Cortinas and Mustangs.  Wills and Hall had been Mann’s closest challengers until the mid-race pit calls, however slow stops for both cars dropped them behind the rapid Minis of Jonathan Lewis and Nick Swift.

By lap 27, Wills and Hall were back in second and third but Wills was clearly struggling to keep the pace; Ben Hall, who had taken over from his father, slipping into second just two laps later.  The podium positions were far from over however as the fast charging number #27 Mustang in the hands of Mike Whittaker was lighting up the track after gearbox problems in qualifying consigned them to the back of the grid.  By lap 30 the Mustang was passed both Minis and into 4th position with just one lap to go.  Could Wills keep the Mustang at bay? … 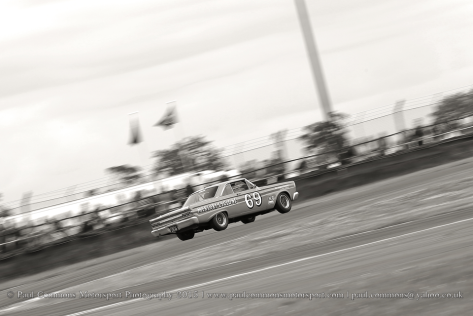 In fact the New Zealander almost managed it but fell just short with a spin at the Melbourne hairpin, allowing Whittaker to claim an unlikely podium spot.  Wills did manage to recover in time to claim fourth however, just in front of the very rapid Minis of Nick Swift and Jonathan Lewis.

What is there not to like about a full field of 60’s and 70′ Le Mans racers headed up by no fewer than 6 mighty Lola T70s I ask?  An era of endurance racing that I dearly wish I could have witnessed in period.

In a re-match of the ‘1000km’ event earlier in the year, Simon Hadfield and Leo Voyazides managed to get the better of arch rivals Chris Ward and Paul Gibson to claim pole by 0.274 seconds.  Having ended the May day bank holiday weekend event in the Craner Curves wall following a brush with Gibson, Voyazides will have been delighted to start the 1 hour race from P1. 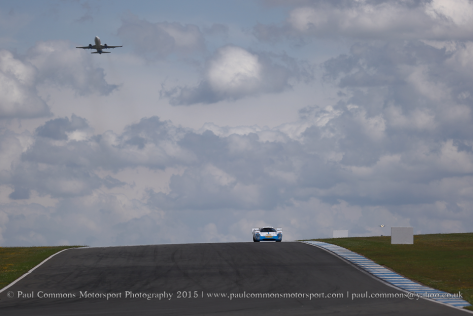 The leading Lola crews had however decided to split their stronger drivers with Chris Ward managing to build a healthy lead of almost 25 seconds before pitting to allow car owner, Paul Gibson, to take the wheel.  Voyazides meanwhile had done well to stay out of trouble and maintain second place from the fast starting Lola T210 of Martin Stretton, giving the incredibly quick Simon Hadfield every chance of hunting down the #99 Broadley machine.

In fact Hadfield’s job was made substantially easier by a much quicker pit stop, leaving a gap of just 10 seconds for the preparation maestro to chase down.  Lapping consistently in the 1:35’s and 1:36’s from then on in the win was never in doubt; Hadfield passing Gibson on lap 22 and going on to take victory by over 48 seconds. 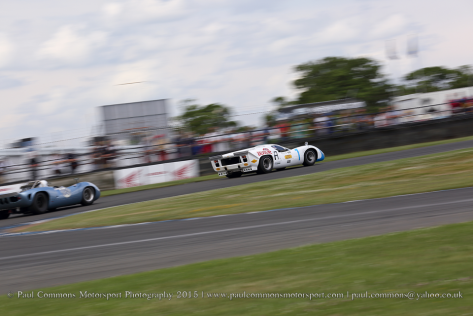 Gibon meanwhile appeared to have enough in hand to cruise to second place.  However, having despatched with the Lola T290 of Michael Gans early on in the stint, the Lola T70’s of Andy Wolfe and James Littlejohn set off in hot pursuit of the second place man, setting times which were 2 to 3 seconds a lap quicker than Gibson.

With only a handful of minutes remaining, the seemingly unbridgeable gap had be closed but Gibson appeared to have done just enough.  That is until he spun at Goddard’s on the very last lap allowing the fast charging Andy Wolfe, co-driven by Jason Wright to claim second while James Littlejohn and Daniel Gibson took a well deserved third.  The spin did not cost Gibson too much in the end however as his Broadley Lola was found to be in breach of the regulations, suffering a 45 second penalty as a result.

The penalty for Gibson did however promote the Marko class winning Lola T290 of Michael Gans into fourth position overall, which represented a great drive having beaten several more powerful machines.

Elsewhere, the Bonnier class victory was claimed by the Chevron B8 crew of Graham Wilson and Mark Hales, while Mark Bates put on a crowd pleasing performance at the wheel of his Porsche 911 to secure top spot in the Pescarolo class. 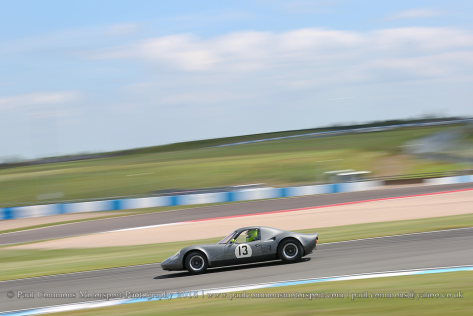 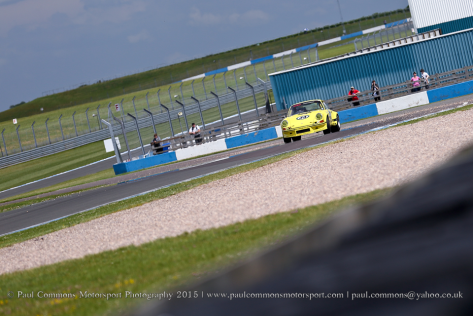 I am not sure there is a better track in the UK to showcase the magnificent historic machines of the Masters series.  Having been matched by glorious July weather, a better weekend of Motorsport action I could not have had.  British GP? No thanks, Zandvoort in late August here I come!