Jason Pritchard and Phil Clarke began their British Historic Rally Championship title defense in near perfect fashion on the Red Kite Stages; a mature drive landing them victory for the second year in succession despite very testing conditions. 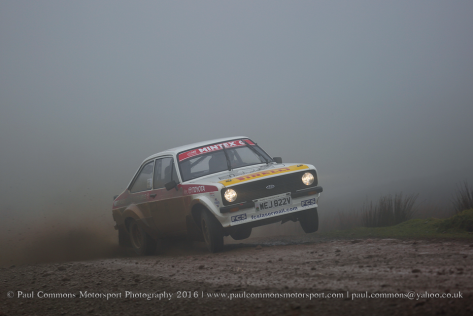 The Red Kite Stages has consistently been a top class event and pleasingly 2016 saw Amman and District Motor Club rewarded with a near maximum capacity entry, not only featuring a bucket load of pristine historic championship entries, but also including the likes of BRC championship hopefuls David Bogie and Tom Cave in brand new R5 machinery.

Whilst maintaining the traditional compact nature of the event, the itinerary for 2016 would see the crews tackle the very fast open gravel roads of route 60 within the schedule of 6 stages which also included more familiar tests in Crychan and Caeo.  With high winds and rain forecast the weather was always likely to have a say in proceedings.  However the thick fog which greeted our entry onto the Epynt military ranges was most definitely not on the menu; a somewhat different challenge to the snow and ice faced by the crews on last year’s event!

Pre-event, the smart money would have been on 2014 RAC champs, Nick Elliott and Dave Price, to lead the way; widely regarded as one of the quickest MK2 pairings on Welsh gravel.  However, a cold ridden Elliott endured a difficult start to the event; a stall in the opening Crychan stage losing the Cheltenham man an estimated 22 seconds!  But such was his pace, the traditionally fast starting MK2 pilot would only drop 4 seconds to Jason Pritchard, the eventual stage victor.

Whilst Pritchard had taken an early lead it was the flamboyant Joe Price, with Chris Brooks alongside, who would top the time sheets on Route 60 before Elliott would make it three different victors in as many stages with a good time through Caeo, leaving the 3 crews separated by just 15 seconds at the mid-day service halt.  The scene was set for an almighty battle over the afternoon loop of stages; precisely the reason why I was up at 4am on a Sunday morning!

I am not sure what Pritchard had eaten for lunch but it most certainly did the trick.  His blistering time through Crychan 2, whilst coinciding with another stall and time loss for Elliott would ultimately be the defining stage of the rally; A likely victory cemented by fastest time over the second running of route 60.  Pritchard and Clarke amazingly equalling their morning stage time, in what was now significantly worse conditions, to take a 26 second buffer over Price into the Caeo finale with Elliott a further 2 seconds back in third.

Elliott is not a man to give up without a fight however; his electric final stage charge to regain second position overall and the class D5 victory proof if ever it were needed.  And on a day when things didn’t exactly go to plan for Elliott, the points for second overall are a nice consolation prize to take into Rally North Wales in just over 1 month’s time. 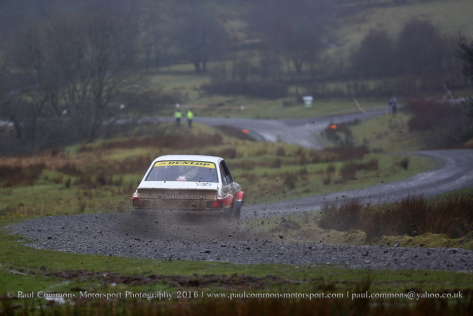 Meanwhile Pritchard had already done the hard work in stages 4 and 5 and knew that a sensible pace through the 9 miles of Caeo would be enough to wrap up the opening round victory; a 28 second gap was too much even for Elliott to close.  This had been some drive by the 2015 champion!

After missing the event in 2015 through illness, 3rd position overall represented a great result for Price and Brooks in their infamous bright Orange MK2.  What’s more, sitting just 31 seconds down on the event winners by the close of play, setting 1 fastest time and never outside the top four on the other five tests, shows the pace is there to mix it at the front; encouraging signs for the remainder of the season.

In fourth, Paul Barrett and Dai Roberts put in yet another giant killing performance to take class D3 honours by a whopping 4 minutes and 17 seconds.  Like Price, Barrett and Roberts were never outside the top 4 stage times all day; their 4:25, second quickest blast through stage 5, taking this huge cut along the way, surely the highlight.  Incredibly they would end the day just 46 seconds down on the rally winners.  At times you really do have to remind yourself that it is a Pinto engine in the Northern Irishman’s Ford!

Guy Anderson and Steven Davey were the star performers in class D4.  Nearest rival, The Triumph TR8 of David Kynaston and Paul Wakely, was no match for the nimble Sunbeam in the truly awful conditions, leaving Anderson and Davey to take class victory by over 6 minutes with 22nd position overall. 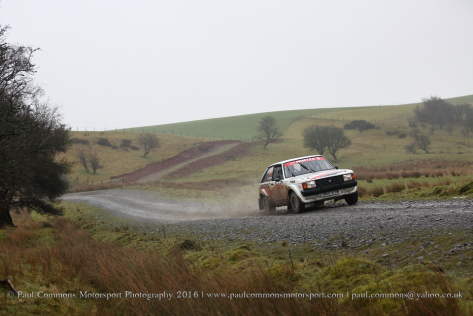 Meanwhile Chris Skill and Tom Jordan put in a strong performance to claim class D2 honours in their 1600 Escort MK2.  Their opposition may have fallen by the wayside however they did get the better of several more powerful machines to finish the event in 24th position overall. 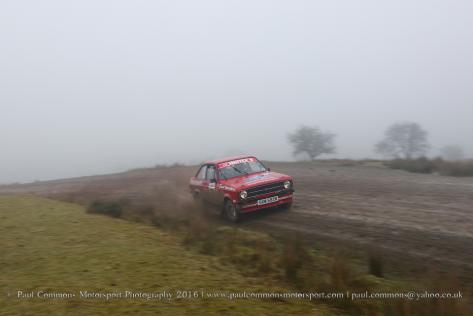 Following the sad news of David Stokes’ passing just a week and a half before the event, it is fitting that we had a category battle to remember.  Long time co-driver to the legendary David Stokes, Guy Weaver, was partnered with Stanley Orr for this event in a C3 specification MK1 Escort and boy did they put in a performance that the big man would have been proud of!

2015 category champions, John Perrot and Keaton Williams were quickest out of the starting blocks however, opening up an 8 second lead over class C5 rivals Simon Tysoe and Paul Morris on the opening Crychan test.  They would then go on to set fastest category time on each of the following 3 stages to increase their lead to a comfortable 23 seconds.

Orr and Weaver may have elected for a steady start but they clearly had the pace to challenge, passing Tysoe for second in category after Crychan 2, before a stunning run through a very foggy Route 60 would see them sit just 11 seconds behind Perrot with only the 9 miles of Caeo remaining.  Could they really snatch victory on the last stage of the event?

But for gearbox problems, Perrot and Williams may well have had enough time in hand to take the category victory; instead the Hereford man was unfortunately relegated to 4th after losing 2 minutes at a Caeo hairpin.  A real sting in the tail for the long time leaders.

You can’t take anything away from Orr and Weaver however.  To be anywhere near the front running pace in a class C3 MK1 Escort is borderline heroic.  8th fastest through Caeo to finish 9th overall is a fantastic achievement; class and category honours the icing on the cake! 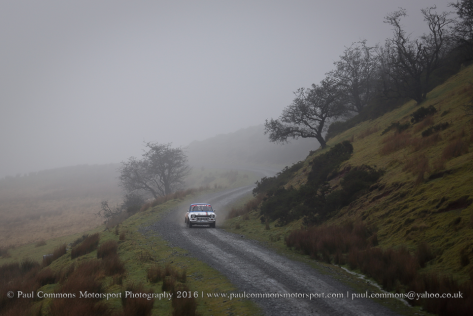 Second in category and 12th overall was enough for Simon Tysoe and Paul Morris to claim top spot in class C5.  After sitting the right side of a 1 second margin to third at the half way point, the long time MK1 pilot was a victim of Orr’s afternoon charge; eventually dropping 32 seconds behind the Northern Irishman by the end of the day. 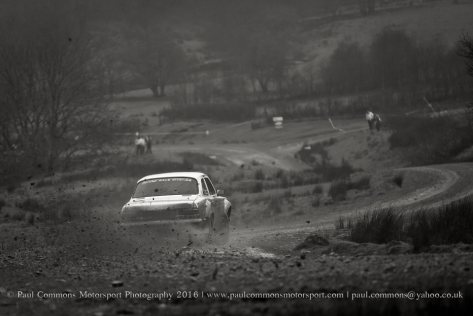 Having witnessed Adam Milner’s impressive drive on last year’s Malton forest Rally, big things can be expected from this Yorkshireman in 2016.  Unfortunately Milner, with Roy Jarvis alongside, had been blighted by a misfire all morning, but having cleared during the afternoon, the Malton MC man was able to show what is possible at the wheel of a 1600 MK1; rising from 5th to 3rd in category by the end of the day and claiming class C2 honours with 13th overall; unbelievably setting 8th and 7th fastest times in stages 5 and 6 respectively! 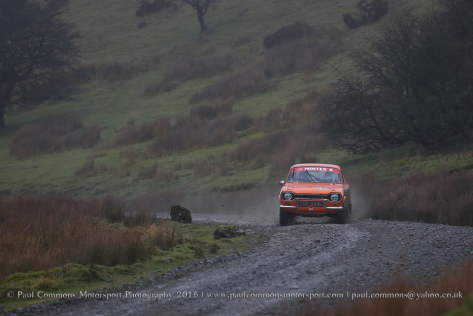 It was an all Ford Cortina affair at the sharp end of category 1 with the MK2 GT of Bob and Dale Gibbons holding a 7 second lead over the MK1 of Bob Bean and Malcolm Smithson at the half way service point.  A battle which would rage on well into the afternoon before being ultimately decided on the very last stage when the evergreen Bean was forced OTL by an electrical failure.  Bob and Dale Gibbons therefore going on to claim category and class B3 top spot with a strong 34th position overall. 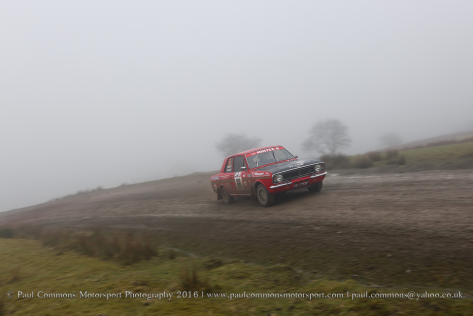 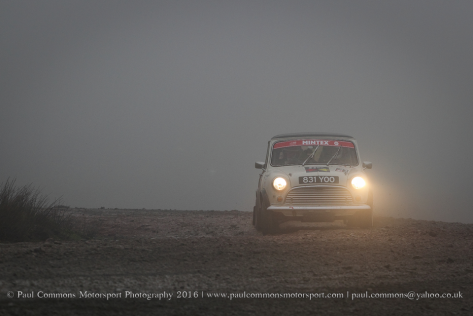 The rejuvenated British Rally Championship has attracted some of the top names in British rallying, and two of which, namely David Bogie and Tom Cave had chosen the Red Kite to debut their new machinery.  The 2 crews couldn’t have had more contrasting days however with Cave and co-driver James Morgan fortunate to escape injury after a big off in the first stage, whilst Bogie and Kevin rae went on to take National B victory in their Fabia R5.  Getting the better of a Julian Reynolds piloted Focus WRC is no mean feat and suggests that Elfyn may not have things entirely his own way in 2016! 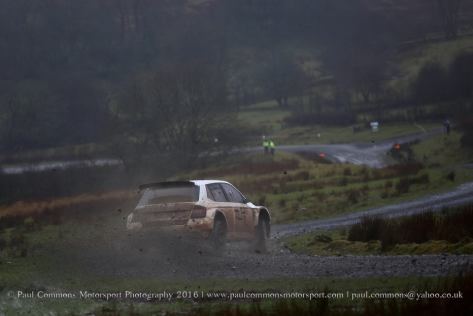 Looking back I am not sure I have experienced such foul weather whilst out on a rally.  The combination of rain, fog and wind was not pleasant.  Never before have I expended so much energy in an effort to remain standing, but at least it wasn’t cold!  Photography was even tougher; After running out of clean filter options I even reverted to my 7D and 70-200 f4!  And without a Monopod even fewer photos would have been in focus!

Next up for me is the Mid Wales Stages in early March before another instalment of the British Historic Rally Championship with the Rally North Wales in April.  Hopefully Robinson and Collis will be up to speed by then in their stunning RSD prepared 131 to take the fight to the all conquering blue oval!